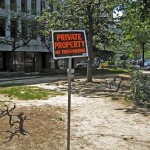 Following the recent four-day occupation of an empty bank building at 75 River Street in Santa Cruz and the attempted occupation of an empty warehouse in Seattle, the controversial tactic of attempting to seize and hold vacant private property has been taken up as a new front of a sprawling social movement. These actions move beyond protesting the enclosure of public space and stifling of free speech; they aim to expand the scope of critique to the role that private property plays in our current crisis. This change in scope has not been lost on the landlords. “I’m definitely not in agreement with this group taking over private property,” a local property owner told the Mercury News.