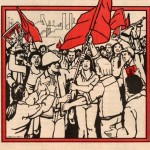 In one sense the history of the NCM can be summed up as “a moment of sectarianism and dogmatism.” In another sense, however, the NCM was more than the sum total of its sectarian and dogmatic errors. It attempted to keep alive the remnants of the mass movements of the 1960s, it organized workers, built left caucuses in unions, mobilized struggles around fundamental issues of racism, women’s rights, immigrant rights, and built movements in solidarity with liberation struggles around the world.