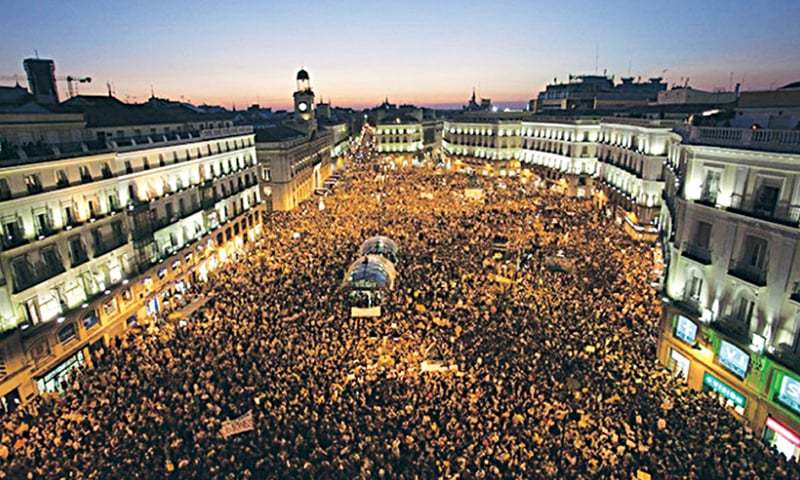 The success of “citizen initiatives” like Barcelona En Comú in this weekend’s Spanish municipal elections seems to confirm Spain and Greece as the – tentative, but still hopeful – “success stories” in the global cycle of struggles that followed the Arab Spring. Yet one way in which their novelty has been interpreted sounds rather old. If they suggest a model and a way forward, this narrative goes, it’s because they’re simply cases in which social movements discovered what they should have known all along. This is, in short, a linear, teleological story in which Greek and Spanish movements would have simply run the full developmental course from infancy (loose networks and social protest) to maturity (party-building and institutional change) that was cut short elsewhere. From networks to parties, the time has come to occupy the state.

This narrative has three outstanding problems. The first is that it doesn’t quite tally with the one most movement participants themselves would tell; the second, that what we saw in Spain was not the growth of one, but several electoral initiatives with diverse compositions; the third, that it’s badly posed.

Any talk of a shift “from networks to parties” is badly posed because the word “network” functions in two different registers. A network is both a specific organizational form, like “party” or “federation,” and a much more general descriptive term used to describe any group of people (or things) that are related to each other. If it could make sense, in the specific register, to talk about “parties” replacing “networks” as organizational forms of choice, in the second case it simply doesn’t. In the general register, not only should parties (and federations etc.) be understood as kinds of network, shaped in a particular way by their structures, rules and dynamics; they should be understood as embedded in a broader background which is best described as a network.

This may sound scholastic until we realize it has one important consequence: it forces us to shift our way of thinking from individual organizations to an ecology of them. Each organization, whether it is a party, a federation or a loose affinity group, can be understood as a node in a broader network that will be sparser here, denser there, and can at any given time have several different organizing cores capable of mobilizing a long tail of less active, less organized nodes to different ends – online petitions, direct action, voting. These will tend to display different organizational forms, more or less adequate to the kinds of functions they perform within the broader network.

With that shift of perspective, the ‘maturation’ metaphor becomes harder to sustain. Rather than an entire ecology morphing into a single organization, what we have is new (or pre-existing, as with Syriza) organizing cores that grow in importance within the overall ecology as what can best perform a particular function – in this case, institutional politics. This is precisely how Spanish activists have explained the recent electoral drift time and again: “we built a strong, diverse movement that was capable of doing many things, but the political system wouldn’t move an inch; so we realized that electoral politics was something we needed to do too.”

In other words, rather than the network logic of complementarity being replaced with a logic of unification demanded by accepting the centrality of state power, what we have here is an extension of the first logic into a field, the state, that had until then been rejected. The change lies, therefore, in a recognition that, as movements kept running up against the limits imposed by an unresponsive and increasingly repressive political system, the state also had to become a site of struggle – as a condition, in fact, for movements to be able to continue their work. That’s quite different from a radical u-turn in movements’ conceptions of social transformation, which still go farther than mere policy change or institutional action.

It is not, then, that yesterday’s critics of representation and the state have realized the error of their ways and embraced electoral politics as the only game in town, nor that they have forgotten about its risks. The electoral drift should be understood, rather, as both a symptom of the crisis of representative politics and a strategy of controlled risk. The existing party system had become so beholden to corporate and financial interests that it would carry on regardless of a groundswell of social dissent, holding on to the “legitimacy” afforded by elections with (unsurprising, given the lack of real choice) low turnouts. In response, movements made a wager: that the risks of institutional politics could be staved off for as long as the new electoral alternatives were sufficiently fragile as to remain under social control.

This is what is most instructive about the recent Spanish elections – which marked the growth not of Podemos as such, but of citizen initiatives that included it, not necessarily as the main force. Podemos’ surprise success in last year’s European elections immediately led in two complementary directions: joining its local círculos (grassroots groups) and/or joining the first stirrings of the citizen initiatives that came to fruition in this weekend’s elections. Whereas the first indicates an effort to secure social control over Podemos from the inside, through participation, the second set it limits from the outside, by forcing it to coexist and compose with other, complementary poles of power. The social legitimacy of citizen initiatives effectively precluded Podemos from running alone in bigger cities, forcing it to participate as one player among others.

Whereas the traditional, teleological narrative would see “maturity” as putting all eggs in the one party’s basket, then, Spanish movements hedged their bets, creating an ecology of alternatives that, by balancing each other, increase the possibility of social control. Since no-one can be sure of having a captive audience (such as Labour, PSOE or PASOK once enjoyed), would-be representatives must seek legitimation continuously, and so remain more accountable. If “horizontality” and “verticality” cease to be substantialized or conceived as properties that necessarily adhere to certain things or organizational forms (networks and “the multitude,” parties and representative structures), it becomes a matter of how to control vectors of verticalization. In these terms, the relative fragility of leaders is a strength for the grassroots – a point which has in fact been made since the elections by key Podemos figure Teresa Rodríguez herself.

That goes some way in explaining why Podemos’ rise has stalled in recent months. It’s quite accurate to describe it as a “startup party”: its small band of founders appeared when consensus around the need for an electoral alternative was established, and if thousands were willing to “invest” in them, it was because the party offered direct participation via the círculos, and because the more it grew, the more viable it seemed. In short, non-affiliated people put their faith in it because it looked both credible and controllable, in what was a unique case of “mass entryism.” The subsequent move to sideline the círculos and concentrate more power in the hands of party founders has left many feeling they’d lost control over the party and its discourse; dampened enthusiasm and diminished participation have contributed to deflate the original ‘bubble’. The victories of citizen initiatives, in which Podemos both played a key role and were not the sole protagonists, offer it both a new shot of enthusiasm and a sign which, if well read by its leadership, could inflect its trajectory in the direction of greater openness, hence trust, hence also support.

The advantage of relatively fragile representatives also offers a key with which to read the Greek situation. After winning an election that it probably wouldn’t have won with a pro-Grexit platform, Syriza now faces the choice of either betraying their anti-austerity mandate or taking the unpredictable road of leaving the monetary union. That their staunchly pro-Euro leadership seem increasingly willing to contemplate the latter option not only reflects the democratic deficit of European institutions, and thus the broader crisis of representative democracy, but the acknowledgment of a political weakness: the very real risk of political suicide that would result from capitulation. That is a weakness that could very well turn out to be in the Greek people’s favor.

For representatives to remain fragile, what matters at the end of the day is how strong social movements are; and therein lie many risks. Both the successes and the inevitable disappointments of the electoral drift could have demobilizing effects, diminishing the pressure from below. Besides, winning elections entails losing key movement players to the state apparatus, and given the difficulty of getting electoral alternatives off the ground, people might eventually grow used to settling for less – both of which lead to a loss of autonomy vis à vis institutions. Finally, whereas movements can afford to be complementary, parties are by nature competitive; it is in their nature to seek domination over the electoral field, and so there is a limit to how diverse that field can remain.

As Pierre Clastres once suggested, the emergence of autocratic, unresponsive and coercive forms of power should perhaps be explained less by themselves than by the social field’s incapacity to continuously exorcise them. Apart from how they deal with all the other challenges facing them now, how well Spain and Greece do in that respect will be one of the grounds in which they can be judged as offering a model and a way forward.

This article was co-published with Plan C.

teaches modern and contemporary philosophy at the Catholic University of Rio de Janeiro (PUC-Rio). His book Beyond the Horizontal: Rethinking the Question of Organisation is forthcoming with Verso.