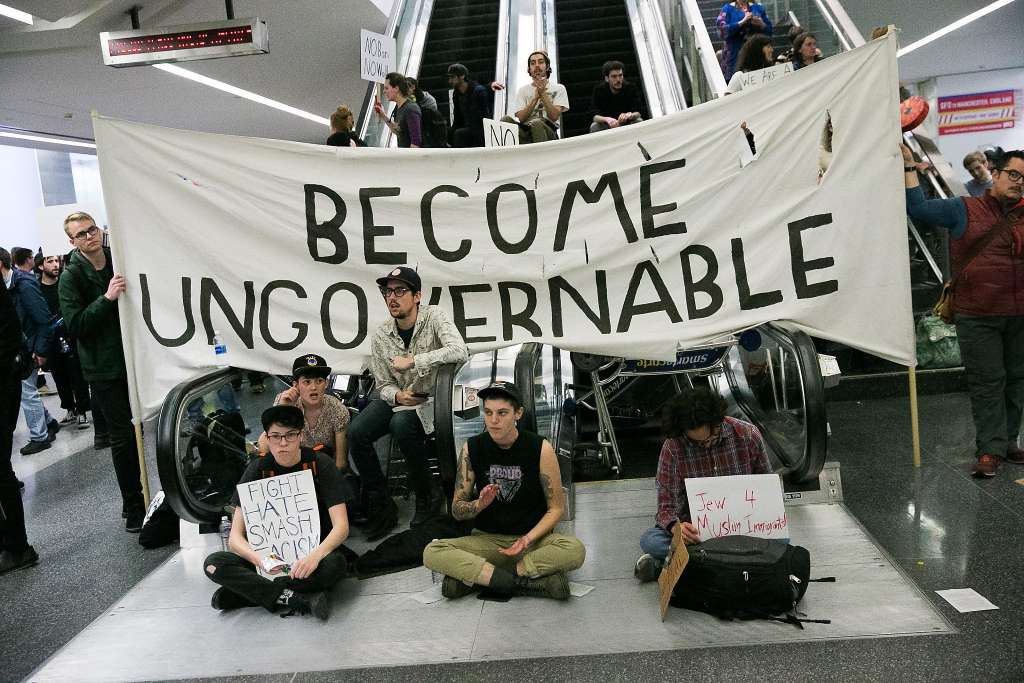 As Ronald Reagan was ushering in the era of neoliberalism, my parents immigrated to the United States from Karachi, Pakistan. Hoping to pursue academic careers in an environment of intellectual freedom and material abundance, they settled in a small university town in the middle of rural Pennsylvania, where there were no mangos in the supermarket.

In a large crowd of demonstrators at San Francisco International Airport, I imagined their arrival. As you would expect at an airport, the crowd was diverse, a global array of nationalities, ages, and dispositions. But in the place of exhaustion and anxiety, this crowd displayed energy and outrage. They shouted loudly, against Trump and his Muslim ban, that refugees are welcome here. By sheer numbers they managed to shut down all departing flights. Seeing a young boy there who had fashioned a sign for himself reading, “son of a refugee,” I thought of how much my own life had been shaped by the flight that brought my parents to this country. I was reminded of everything the Muslim ban threatens to tear apart – not just families, but the lives and dreams of those who have traveled across an ocean in search of a new life.

Many desires spur immigrants to travel, but they are united by what Sandro Mezzadra calls “the right to escape.” To escape from poverty and persecution, to discover new geographies, and to speak in new languages. The desire of the immigrant is a world with no borders, a world with no detention, a world in which humans move freely and welcome every stranger. It is the recognition that it is possible to think, speak, and live otherwise.

Therefore to defend immigrants is a revolutionary act. The beauty of the airport crowd, which overwhelmed me, was the decision of so many with no personal stake to defend the rights of every immigrant. Those who had nothing to lose but their own comfort and security were there alongside the children of refugees, shouting just as loudly. They brought into being what Alain Badiou calls an “egalitarian maxim proper to any politics of emancipation,” one which will need to be repeated every single day that follows. It is a maxim which calls unconditionally for the freedom of those who are not like us. And as any immigrant knows, everyone is not like us, and we are not even like ourselves.

This seeming paradox was illustrated by a sign one protester held that read “Jews Stand With Muslims.” The slogan draws on what Judith Butler describes as “Jewish resources for the criticism of state violence, the colonial subjugation of populations, expulsion and dispossession” as well as “Jewish values of cohabitation with the non-Jew that are part of the very ethical substance of diasporic Jewishness.” Support for Muslim refugees can claim a foundation in an ethical tradition that is central to Jewish history. Yet advancing a critique of Israeli colonialism, Butler argues, requires rejecting the claim of “the exceptional ethical resources of Jewishness.” It is the “significant Jewish tradition affirming modes of justice and equality” in which Butler bases her critique of Zionism. But in doing so, the idea of any one tradition’s exceptionality is called into question. To criticize Zionism and affirm justice and equality means going beyond every kind of exceptionalism — it thus “requires the departure from Jewishness as an exclusionary framework for thinking both ethics and politics.” 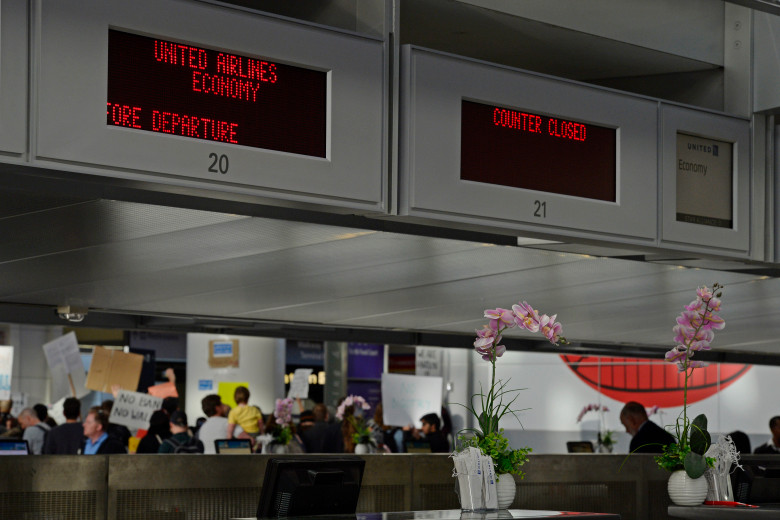 Those of us of Muslim lineage will have to claim our own ambivalence. We might begin by recalling the Pakistani Marxist poet Faiz Ahmad Faiz, who wrote his famous poem “Hum Dekhenge” (“We Shall See”) in 1979, in protest of the Islamic dictatorship of Zia-ul-Haq. In the tradition of Urdu poetry, Faiz adopted the language of Islam, attacking Zia as an idolator and offering a revolutionary prophecy:

Moving through Islamic language, Faiz was able to point to a politics beyond exceptionalism, a possibility which his Marxism provided. We put these politics into practice when we stand alongside others and act according to the egalitarian maxim. I fight for my own liberation precisely because it is the right of the stranger.

Strangers abound in the airports, as they did the weekend after the inauguration. After so many evenings spent in meetings with three or four of the usual suspects, we may find ourselves bemused by the appearance of new faces. For years we have agonized over how to impart to our neighbors the urgency and necessity of building a new society, and with a stroke of his pen Donald Trump has stirred them into anger and indignation. They now begin to realize what we have always known — that oppression is no aberration in our world, and that no politician can be trusted to correct it.

These strangers are right to leave their homes to join us, and it is our privilege to welcome them. Simply by showing up to their first demonstration — at some of the highest risk, highest security sites in the country — they discover the joy of disobedience. It is the joy which comes in learning that this terrible machine is fueled by our participation, and that we have the power, when we act together, to make other worlds real. 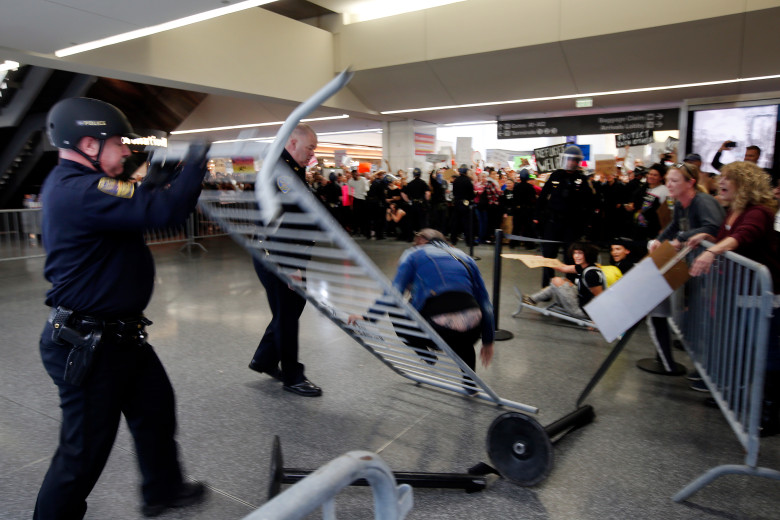 There will be Christians who remember that Jesus Christ was a Middle Eastern refugee. There will be liberals who are traumatized by the devolution of capitalist democracy towards the old, ugly ghost of fascism. There will be those with a distaste for politics who are simply shocked by the decline of kindness and decency. The principle their activity has generated is indifferent to their origins, to their consciousness. What they have created is new — what it requires is a generalization. And this will happen not when they are converted to anyone’s pet ideology. It will happen when their activity is composed into the form of new organizations that will change not the president, but the world.

This is our responsibility. To be faithful to what every new activist has created — to have the courage to speak out loud about the necessity of confronting the whole social structure, and to provide the forms of practical activity that will make such an understanding viable. To make it possible to think the revolution.

If the popular consciousness behind the rebellions is that “Love Trumps Hate,” then the necessary response is that love must furnish itself with means of self-defense — it must evade the fate of the prophet without an army. If indignant Americans recall Obama’s “hope” with nostalgia, then let us demonstrate what else hope can mean. A remark of Antonio Negri gives a precise description of the process:

Lessen the anger against injustice by means of the analysis of its structural causes, and through this build a higher level of hate against exploitation and domination. Many people tell me that, like Marx, I too am a corpse — but I don’t see humour in their eyes, only fear. The advantage of my hatred is that it is articulated on, and mediated by, hope.

So there is a hatred to affirm: the hatred of the existing regime, a class hatred. Only a consistent antagonism to the system makes genuine love possible. Without it, there is no hope.

In the airports, we have formed our itinerary. Begin with the joy of disobedience, the love of the stranger, and the hope for the new. Move onward to class hatred and the science of structural analysis. Continue to travel, never satisfied, to arrive at the power that is constituted by organization.