is Ziqiang Professor in the Department of Cultural Studies at Shanghai University, China, and Professor of Literature at the University of California Santa Cruz. He publishes on contemporary Chinese politics and culture, capitalist geographies, and the global 1960s. 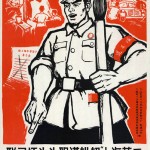 At the end of the Qing dynasty and in the early twentieth century, a significant number of Chinese revolutionary activists and theorists believed that anarchism was China’s most promising revolutionary path, and that was in part because it corresponded most closely to the actuality of social existence. The vast majority of the population, after all, lived their lives with next to no relationship with the state, whose functionaries almost never reached the village level, and whose levies and regulations were for the most part administered by members of the local elite, with ties to their communities that were many and varied.