was a student of the (now closed) Centre for Cultural Studies at Goldsmiths. She lives in Ireland. 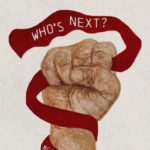 Outwardly, the sequence of events at Goldsmiths may be read as a demoralizing series of defeats, by which SMT continues to erode worker security irrespective of organized opposition, made all the more disheartening by mass resignations—with many citing toxic working conditions under current management as the reason for their voluntary departure. The stakes of the struggle are also revealed just here with two potential outcomes: 1) For SMT to realize their restructure, erecting a more violent institution while flagrantly working to impair future oppositions by reducing the workforce and targeting trade unionists for redundancy; or 2) For the dispute and boycott of Goldsmiths to mark not simply the unmatched extent of one local pushback but the mere beginnings of a protracted labor campaign to be sustained against the university in its current form—and perhaps against worker-governability by the managerialism that now characterizes higher education. It may only be possible to see the struggle defined by the defeat of one side in the presumption that its ends are within sight.