was a philosopher and a founding member of the
Ligue communiste revolutionnaire. He was the author of books spanning
a number of topics, including Marxism, Walter Benjamin, the French
Revolution, and Joan of Arc. 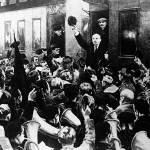 I. The Revolutionary Crisis 1. Attempts at a Definition In several places throughout his work, Lenin tries to define the notion of a “revolutionary crisis,” especially in Left-Wing Communism: An Infantile Disorder and The Collapse of the Second International. However, he outlines a notion more than he establishes [fonder] a concept, as the descriptive criteria that he enumerates remain subjective assessments.… END_OF_DOCUMENT_TOKEN_TO_BE_REPLACED