is Associate Professor of Philosophy at the University of Southern Maine. He is the author of The Micro-Politics of Capital: Marx and the Prehistory of the Present and blogs at Unemployed Negativity. 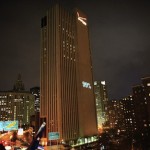