teaches Sociology at UCLA. He is the author, with Waldo E. Martin, of Black Against Empire: The History and Politics of the Black Panther Party, and co-editor of Working for Justice: The L.A. Model of Organizing and Advocacy. 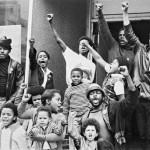 The Black Panther Party was able to sustain disruption because the character of the practices that they had developed, that cultural technology of armed self-defense coupled with this anti-imperialism. It meant that the more authorities repressed them, the more they were able to gather broad allies, who otherwise wouldn’t have supported the party in the first place, but also had their own reasons to really feel threatened by the status quo.