is a legal ethnographer, educator, journalist, public speaker, and DJ, who teaches Media Studies at New York University’s Steinhardt School of Culture, Education, and Human Development, and Sociology of Law at Brooklyn College. She has written for WireTap, the Columbia Journal of Law & the Arts, and other publications, and has contributed chapters to Bits without Borders: Law, Communications & Transnational Culture Flow in the Digital Age (forthcoming, Elgar, 2012), and Dreaming in Public: Building the Occupy Movement (New Internationalist Publications, 2012). As DJ Ripley, she has played in 19 countries across 3 continents over the past 16 years. 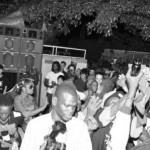 The sound and image of a drum circle may be one of the most easily-mocked moments associated with the Occupy movements. But the role of music in the movement, and its relation to protests and political action in general, bears closer investigation, beyond the drum circle. The concept of “protest music” can obscure some of music’s most powerful aspects as a social force. For many involved in Occupy, the specific relationship between the music being played and the people who hear it has not been thought through very carefully – and this weakness can reinforce political weaknesses. Indeed, when even Salon.com can call 100 tracks of Occupy-themed music “shapeless and safe,” we might ask ourselves what this protest music is missing.