is a graduate student at UC Santa Cruz. 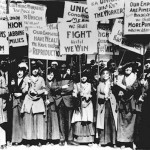 Someday my daughter will ask me how I met her father, and I will tell her about when we occupied the Graduate Student Commons at UC Santa Cruz. At the end of the summer of 2009, a group of college students, graduate students, and staff set about planning a campus building occupation. News of the next school year’s drastic budget cuts had come to the surface, leaving many of us out of jobs and in debt. On top of that, entire departments were being defunded, while class sizes, tuition, and administrator salaries were being increased. The word “crisis” started to echo among us.