is a sociologist with a Master's degree in Gender Studies and Doctorate in Latin American Studies from the University of Chile. 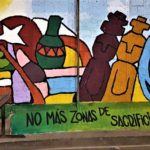 The October uprising in Chile is an example of what we would call a generalized passage from private malaise to collective revolt, a moment in which those sufferings that had been lived in domestic confinement, with guilt and loneliness, are brought out into public space, and understood as socially and politically produced, awakening a will to struggle as well as a mutual recognition between those who share experiences, feelings, fears, and common hopes.