is Professor of Political Economy at the University of Bergamo, Italy. He was a collaborator of the journals Quaderni Piacentini and Primo Maggio in the '80s. He participated in Seminar on Money (1981-5) chaired by Augusto Graziani, a major proponent of circuit theory, the idea that the economic process is a circular sequence of monetary flows; in his writings, Bellofiore has sought to demonstrate that the Marxian labour theory of value can be set out in terms of the monetary circuit model. As a member of the International Symposium on Marxian Theory, he has contributed to the international revival of critical research into Marx's critique of political economy, co-editing the following proceedings: The Constitution of Capital. Essays on Volume I of Capital (2004), Re-reading Marx: New perspectives after the critical edition (2009), In Marx’s Laboratory: Critical Interpretations of the Grundrisse (2013). He has also edited: Marxian Economics: A Reappraisal, Essays on Vol. III of Capital (2 vols, 1998); Rosa Luxemburg and the Critique of Political Economy (2009). 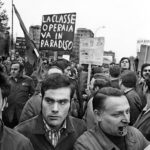 I arrived in Turin with my parents in September of ‘68. It was the dawn of what would later become the workers’ ’69: the great absence – as I will argue – in the commemorations of these years, squeezed between the twentieth anniversary of the student struggles and the bicentenary of the French Revolution.