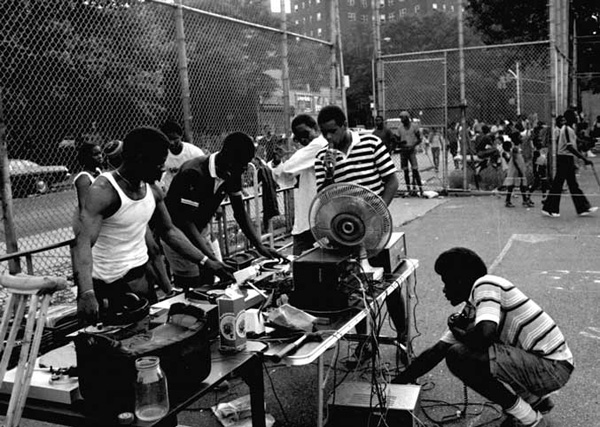 In the early twentieth century, hundreds of thousands of African-Americans migrated from the Deep South to Harlem. Racist white residents fled to the outer boroughs and the suburbs, and landlords began to double and triple Harlem rents, capitalizing on the limited geographic options presented to new black New Yorkers. Families crammed into single rooms, but when the first of the month neared, they still had to search for supplementary sources of income to make their rent payments. Inspired by the tradition of Southern Saturday night fish fries and “breakdowns,” Harlemites began to roll up their rugs, push the furniture aside, and print tickets to promote their “Parlor Socials,” or “Too Terrible Parties.” Hosts invited dueling pianists such as Fats Waller to turn on the heat with “cutting contests,” which sparked unrestrained dancing and revelry, the likes of which working-class blacks could never access in exclusive neighborhood joints that denied admission to black people, such as Harlem’s famed Cotton Club.  The party hosts charged admission, typically a quarter, and made extra rent money from the sale of bathtub gin, corn whiskey, and soul food. The rent party scene served as an incubator for several notable jazz pianists, and it began to play a vital economic and social role in the life of Harlem’s working-class community.

Though some recent media accounts depict rent parties as a novel practice of the alternative white twenty-somethings who gentrify black communities, they began as a dynamic and autonomous response to exploitation, and warrant careful study as a traditional practice of occupation. Although the concept was not widely addressed in mainstream U.S. media prior to the seizing of Zuccotti Park and various other public and private spaces in American cities, the act of occupying has a rich and complex history. Critical participants have emphasized that the United States is occupied land, and have called for the movement to use the word with acknowledgement of its destructive history for indigenous populations. Those with a global perspective have pointed to the occupation of Tahrir Square, and similar popular movements throughout the world over the past many years. For those anchored in labor history, the term brings to mind the tradition of worker occupations of factories – as a strike technique used to prevent lockouts, and in some cases, to “recover” the factories under worker control. Finally, those who have inhabited abandoned buildings, by choice or necessity, clearly draw links between their life’s work and the habitation of major cities’ parks and plazas over the past several months.

But in spite of this attention to occupation, some vibrant and essential forms of the practice have been overlooked. It is these forms to which we should be looking as the winter months near and the movement begins to realize the need to diversify its tactics.

Throughout the summer of 2011, Philadelphia’s mayor, Michael Nutter, Police Commissioner Charles Ramsey, and the local media whipped up a frenzy, threading together a diverse array of gatherings of black teenagers in predominantly white, affluent areas of the city over the past three years under the umbrella of “flash mobs,” “teen mob attacks,” and even “riots.” A closer look at the eleven incidents identified as flash mob attacks and used as a justification for the enactment of a racist curfew law, which the Philadelphia City Council recently extended across the city for the next two years, reveals that these events have little in common other than the presence of black youth transgressing the boundaries of their neighborhoods to occupy the city’s white economic center.

Several of the incidents can be completely discounted, according to the widely accepted definition of a flash mob, “a public gathering of complete strangers, organized via the Internet or mobile phone, who perform a pointless act and then disperse.” Six friends punching a man in the head on the way home from summer school hardly seems to constitute a mob of strangers engaging in a premeditated, pointless act, and anyone who has spent a day in a dysfunctional Philadelphia public school or one of its equally deranged charter counterparts could easily sympathize with the students’ sense of outrage and misdirected aggression.

Even if we set aside incidents in which a small group of people attack an individual, the collection of events identified as flash mobs is complex and ranges from exercises in auto-reduction to what many Philly teens would just describe as “breakin’ it down.” The news and gossip site Gawker investigated the conspiratorial social media exchanges that led up to a March 20, 2011 flash mob on South Street in Philadelphia and discovered links to Team Nike, a neighborhood dance crew that promotes their weekend parties through public dance performances. But while Gawker snidely concludes that Philly flash mobs and party crews such as Team Nike “might be nothing more sinister and revolutionary than a few street performances that got out of hand,” the Occupy movement can learn a lot from young people’s libidinal disruptions of the street.

While Philadelphia’s white elite spent their summer cowering indoors, bracing themselves for “roving gangs” of black teenagers who might “terrorize” their neighborhoods, the rest of the city embraced the heat and the streets, hosting outdoor parties on every block. Like the flash mob, the block party has much to teach today’s occupiers about taking back colonized spaces, and infusing them with a sense of joyful resistance. Black and Latino teenagers living in the Bronx in the early 1970s began organizing parties, inspired by Jamaican yard dances and sound system culture. They were looking for alternatives to the gang culture that had resulted in the deaths of their friends and brothers, and they were pushing back against the crushing force of “urban renewal,” a state-sponsored movement to destroy communities of people of color in major American cities. Young people organized block parties to make money for school clothes, to push their sound systems to the limits, and to demonstrate their vernacular dance expertise. They stacked up speakers in the parks and siphoned power from street lights, and they danced until daybreak.

The youthful founders of hip-hop, who literally rose from the ashes of their burnt, abandoned communities, followed in the footsteps of the Civil Rights activists who came a half generation before them by dancing in the street; but at the same time, they created a new form of occupation and defined new relationships with each other and their city by breaking away from the limited political paths presented. They created what hip-hop historian Jeff Chang describes as a celebratory “space of possibility,” and the tradition lives on in many communities of color each summer.

Party crews, groups of teens who have been loosely linked with flash mobs and described as “junior varsity street gangs,” have appropriated rent parties and block parties and applied them to the temporary occupation of vacant homes and commercial buildings. Coverage of party crew activities has been centered in Arizona and the Los Angeles metropolitan area, where swathes of vacant or foreclosed tract homes stand empty, inviting teenagers to claim the spaces as their own. The activities of young party crews echo the West Coast rave scene of the 1990s. Although many electronic music events are widely promoted and generously funded today, this widespread acceptance bloomed from a culture in which warehouses, malls, and large fields were secretly taken over, essential party infrastructure was put in place, and participants followed a trail of breadcrumbs and map clues to various locations before reaching the actual event. Once there, ravers had the chance to reinvent the spaces of everyday life, to encounter new bodies and sounds, and create strange new forms of community. In the morning, the occupation would end, the space would return to its mundane state of disuse, and the participants would begin planning their next intervention.

Dancing, in its many forms and contexts, from rent parties and block parties to raves and riots, often involves the active and intentional occupation of spaces that are highly regulated and controlled, and not intended for popping, locking, or any similar kind of social relation. Young people from marginalized communities have long politicized this everyday practice simply by insisting on doing it wherever they want, whenever they want. As the frigid weather sets in, the Occupy movement must look beyond its own borders and consult the annals of history to develop a broader repertoire of effective techniques, and the ephemeral occupation of city spaces by dancing collectivities might be just what this movement needs to increase its momentum.

As the movement consults this history, it must also recognize that there are communities who continue to occupy urban American spaces out of necessity and resilience, and that their tactical knowledge should put them in positions of leadership. I work with 18 to 21-year-old youth who have dropped out or been pushed out of traditional public schools. One of my students, a 20-year-old intermittently homeless black mother who is working towards obtaining her high school diploma and securing a job as a home health care aide, issued a demand to me after presenting her research on homelessness. “Y’all need to do something about this,” she explained. “There are so many houses in North Philly with nobody in ‘em, and then there are so many homeless people with no houses. Y’all need to fix that.” But it’s clear that we’ll only be able to fix it by organizing together.

“Turn on the heat.” The phrase refers to the heat generated by bodies dancing in spaces that we have temporarily reclaimed, but it also refers to the concrete concern of paying for heating as winter approaches. While the occupiers at City Hall in Philadelphia and around the Northeast confront cold weather this winter, many families struggle to stay warm every year because they can’t pay the heating bill. The participants of the contemporary Occupy movement need people of color, poor people, and young people to lead us into new forms of struggle. In order to sustain and expand the movement, their issues must be at the forefront; we have to understand that the cost of utilities is a major political issue. But let’s not think of people from marginalized communities as helpless victims. Instead, let’s learn from their history of resistance in everyday life.

is an educator who has worked with children and youth in schools, libraries, art organizations, and residential detention centers. She lives and works in Santa Cruz, CA.