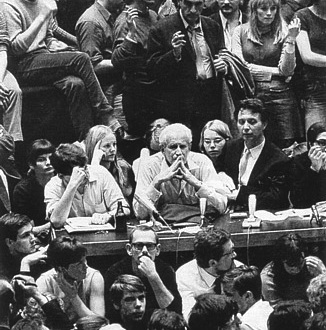 The International Herbert Marcuse Society held its fourth biennial conference at the University of Pennsylvania. A mix of academics and activists, the conference represented yet another attempt to connect the two worlds. What better way than to have Angela Davis herself – renowned intellectual, renowned communist – share her thoughts with us on a chilly Friday night.

Huddled in an auditorium reminiscent of a Spanish Colonial church, the revivalist atmosphere was amplified by the master of ceremonies’ periodic evocations of liberation theology. Stanley Aronowitz, introduced as a prophet, spoke for five minutes. With that we moved into an empowering speech by Ania Loomba, a professor at UPenn, who ended by loudly calling for a march from the conference to the occupation nearby. It was then that Angela Davis took the microphone.

Though reflecting on the legacy of Marcuse, the continuing relevance of critical theory, and the importance of the struggles of her time, much of her talk unsurprisingly revolved around the Occupy movement of today. She applauded us for our inclusiveness but warned against abolishing all difference: it is a “complex unity” that we need. She admired our creative use of technology, our courage, and our determination, while reminding us not to forget the struggles of the past.

The conceptual thread running through her talk was the notion of the “long march through the institutions.” Antonio Gramsci had argued that any class hoping to seize power would have to successfully recast its particular interests as the universal interest. This gradual struggle to change the very assumptions of the general public would elaborate the hegemony of our class in a way that would decisively shift the terrain of battle in our favor. For Rudi Dutschke, perhaps the most famous spokesman of the German student left, this meant nothing less than infiltrating the institutions of capitalist society in the hopes of reorienting them towards our own class needs. If we could enter the universities, for example, so as to gradually change the values, desires, and thoughts of those going through it, then when the time came to move from a war of position to one of maneuver, we would already have the support of broad swathes of the population.

Davis used this problematic to argue that the struggles of her generation had affected our struggles in a very real way. By migrating into the academic world, they kept the fires burning, passing on a valuable critical perspective to newer generations who would eventually reanimate the past to change the present. In other words, though they may have lost their war of maneuver, the radicals of her day won the war of position. As she put it, the long march through the institutions is “finally bearing fruit.”

For us, Angela Davis is important because the history in which she played such a critical part provides us with a set of weapons we might be able to use today. Her history is invaluable to our struggle. But while we are certainly always studying the past in the hopes of acting more profoundly in the present, it’s still important to recognize that much of the movement has sprung from the material conditions of a changed historical conjuncture. In other words, the struggles of today are not just occurring because we happened to look more closely at the past, but because we finally happened to take a closer look at the present. Their real truth is not to be found in the conditions of the 1960s, but in the conditions of today.

As Angela Davis herself noted, the divide that separates these historical moments is quite sharp. She remarked that while the movement of her day was largely fragmented, exclusive, if not fully divided, today’s movement is inclusive, as represented in the slogan of the 99%. Such differences in the forms of struggle strongly point to differences in the forms of production. This movement may be more nominally inclusive, but only because capital itself has systematically tried to reduce so many of us to the same common situation: mired with high debt and student loans, living an under-employed, precarious existence in a world with no future. If we’re more inclusive, that’s probably because capital has already imposed that inclusion on us all. Our slogan is a strong political response to the restructuring of the capitalist mode of production; it’s our way of turning these changes in the capital relation in our favor.

Marcuse, Angela Davis’s teacher, once commented, “theory will preserve the truth even if revolutionary practice deviates from its proper path. Practice follows the truth, not vice versa.” But maybe we are seeing the opposite happening here. Practice is not lagging behind theory, nor is it simply trying to realize a theoretical program already etched years before. Perhaps the language of the Occupy movement demonstrates instead that all theory flows from practice; that, if anything, practice mines the theories of the past in order to understand itself better in the present.

Angela Davis’s speech connected the past to the present in a way that rallied the audience, energized the crowd, and readied us for a strong march through the city. Just when we thought it was time to go, the MC took the microphone and asked for questions. But one of the risks of a formalized direct democracy is that it can so easily break the momentum of a movement. Speakers rose to ramble into the microphone, the audience grew restless, and the general energy began to flag. By the time it was over and we decided to march we had lost not only a third of the audience but much of our élan. But we trudged on, repeating a few chants on our way to City Hall.

There are a number of observations to be made about all of this. But the most striking has to do with the question of audacity. We had a situation where hundreds were galvanized by the powerful words of a respected comrade. Instead of seizing on this opportunity, the daily routine of the academic conference was quickly reestablished. Instead of a Cohn-Bendit jumping onto the stage to demand a general strike, we all watched in silence as the night grew cold once again. We thought of Cohn-Bendit in Parliament.

Obviously we can’t romanticize the old student leaders, but letting opportunities slip away in times like these could have larger consequences in the future. It’s true that academic conferences can’t be formulaically turned into calls for a general strike. It’s just a matter of being on the lookout. Many academics did not take part in long march through the institutions; some have been in a long hibernation. Maybe renewed audacity will succeed in waking them up to a period of profound historical change, with new strategies and directions for struggle. The situation seems to be excellent. But to take advantage of that, “il nous faut de l’audace, encore de l’audace, et toujours de l’audace.”