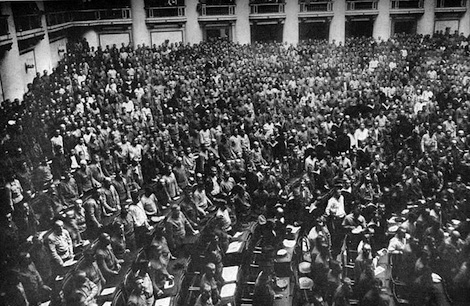 The occupations movement is highly structured, and this structure is a focal point for political debates. Decisions are made by the general assembly (GA) through a process of democratic deliberation; it also serves as the basis for the delegation of responsibilities and tasks, which are required both to keep people participating and to organize political activity. Jodi Dean argues that in spite of the potentially individualist ideology of the consensus model (everyone speaks for themselves), it actually serves to build the kind of solidarity that can only be achieved by “hours and hours of conversation.”

There’s an intriguing resemblance between today’s GAs and the “workers’ councils” that were a dominant force in the revolutionary movements of early 20th-century Europe. The major difference, of course, is that the workers’ councils existed in factories, and their primary role was to manage the production process; they demonstrated that the only function of the bosses was to exploit, and that workers’ self-management could effectively build a society. For some, especially the German and Dutch “council communists,” the councils had an even greater role: they would not only manage production, they would also be the sole political organization in the fight for proletarian emancipation, thereby rendering the bureaucratic communist parties as irrelevant as the bosses. The original occupations, in fact, were factory takeovers that instituted workers’ self-management.

Our situation is clearly different, so it’s no surprise that the GA is different. That it takes place on the street instead of the factories is a logical consequence of the radical shift of the American workforce out of manufacturing. Service work has an entirely different mode of socialization; it’s hard to get people together into a council without a shop-floor, when employees work at different hours, when they’re deskilled, and when they need every day’s wage to make their mortgage payments. Unemployment adds to this transformation, shifting an already fragmentary socialization outside of the workplace.

The strike we saw in Oakland was a political action that grew from the GA, just as the classical general strike accompanied the councils. It was formed and organized in a space outside of the workplace, and it found ways to link up with some elements of the workforce.

However, it’s important to ask how these forms will evolve. The GA made a remarkable achievement by voting for and organizing the general strike. But anyone who’s attended a GA will understand that it’s very hard to carry out the less dramatic tasks that are required to keep a movement strong between actions. The strike came at a moment of serious radicalization, and was voted for almost unanimously. Disagreements, however, which make the GA the radical deliberative space that it is, can seriously limit its organizational capacity. Organizational tasks already occur on a different plane from mass deliberation; they are done in smaller “breakout groups” or “working groups,” or are simply “bottom-lined” by individuals who are willing to assume leadership for a specific goal. When the problems of the breakout groups leak into the GA, and when different political factions enter into argument, the structure inches dangerously towards a kind of ossification and bureaucratization. For example, liberals whose primary interest is in collaboration with the state are able to exert control by taking advantage of GA democracy and subjecting it to the powerful existing structures of administrative bureaucracies.

The debates of the early 20th century between council communists and their comrades took place because these organizational tasks used to be carried out within the communist parties. Some who were sympathetic to councilist critique of the party were still cautious about the notion of councils playing a fully political role, and they anticipated a problem that emerges today: by forcing the GA to take on the tasks of the party, it is less able to do what it should do – not merely deliberate, but also provide a space for free expression of the workers’ antagonism, and the prefiguring of a communist organization of social life.

This doesn’t mean that the council can just be an unmediated expression of political wills; Disaster Notes invokes the French theorist of “self-management,” Cornelius Castoriadis, to describe “a minimal degree of alienation involved in any political form.” It’s an interesting reference, because this is exactly the kind of problem foreshadowed in Castoriadis’s earlier exchange with the Dutch council communist Anton Pannekoek. We ran our translations of these letters in the issue on the occupations because their relevance for our moment is so profound; those who are interested in the historical context can check out our introduction to the exchange.

Pannekoek was strongly critical of any kind of vanguardist party. Though he recognized that the political process would be characterized by conflict, he still argued that the primary emphasis had to placed on the council:

Not only was was this part of the process of decision-making, it was actually the working class’s form of political activity. “The true form of action of a class in struggle,” he wrote, “is the force of arguments, based on the fundamental principle of the autonomy of decisions!”

But while he reasserted the centrality of the workers’ councils, Pannekoek nevertheless argued that there was a clear need for outside bodies to supplement council activity – simply because an education in the revolutionary process could not be achieved instantaneously by deliberation. So the task of the party was “essentially theoretical.” While the party would “find and indicate, through study and discussion, the best path of action for the working class,” it would ultimately be up to the working class itself “to decide the best way to act in their factory meetings and their Councils.” In clarifying “the ideas of the workers by explaining the important changes in society, and the need for the workers to lead themselves in all their actions, including in future productive labor,” the party would make working-class decisions possible and powerful. It is an appealing perspective for those who find themselves standing on the street with newspapers and leaflets to distribute; as Pannkoek wrote,

The most noble and useful task of a revolutionary party is, by its propaganda in thousands of small journals, brochures, etc., to enrich the knowledge of the masses in the process of a consciousness always more clear and more vast.

Castoriadis agreed with the general sentiment, but voiced some concerns about the idea of a purely theoretical function for the party. He pointed to the importance of defending against elements who sought to suppress working class autonomy:

From the very moment that these organisms of the working class have been constituted, the class struggle will have been transposed to the very heart of these organisms; it will be transposed there by the representatives of the majority of these “groups or parties” which claim to represent the working class but who, in the majority of cases, represent the interests and the ideology of the classes hostile to the proletariat, like the reformists and the Stalinists. Even if they don’t exist there in their current form, they will exist in another, let us be sure. In all likelihood, they will start with a predominant position. And the whole experience of the last twenty years – of the Spanish war, the occupation, and up to and including the experience of any current union meeting – we learn that the militants who have our opinion must conquer by struggle even the right to speak within these organisms.

Despite their clear differences regarding the specific function of these supplementary forms, both Pannekoek and Castoriadis insisted on their necessity. It was actually only through the assistance of these other forms of struggle, they argued, that the councils could realize their revolutionary potential.

Of course, we can’t resurrect party forms that simply repeat what happened a century ago, ignoring a wide range of historical changes. But we do need auxiliary forms that allow the GAs to develop in the most revolutionary direction. Some are rightly cautious of the potential for a more centralized organization to become authoritarian and bureaucratic; but a mass movement is capable of learning from history and imagining new solutions. While rejecting the ossified forms of the Trotskyist and Stalinist groups surrounding him, Castoriadis reaffirmed the need for development and experimentation:

Ultimately, to refuse to act in fear that one will transform into a bureaucrat, seems to me as absurd as refusing to think in fear of being wrong. Just as the only “guarantee” against error consists in the exercise of thought itself, the only “guarantee” against bureaucratization consists in permanent action in an anti-bureaucratic direction, in struggling against the bureaucracy and in practically showing that a non-bureaucratic organization of the vanguard is possible, and that it can organize non-bureaucratic relations with the class.

Asad Haider is a graduate student at UC-Santa Cruz, a member of UAW 2865, and an editor of Viewpoint.