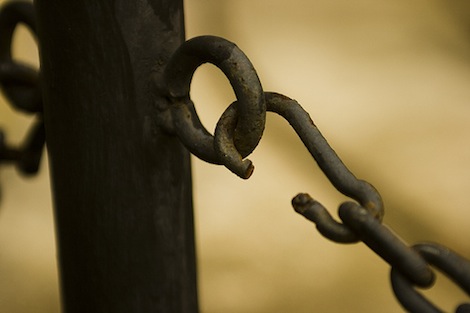 Last Wednesday, while the strike raged in Oakland, nine occupiers staged a sit-in at the Comcast Center in Philadelphia. A number of us met at the jail later that night in solidarity with those arrested as well as those striking on the other side of the country. Conversation quickly turned to Oakland. There was a sense of fascination, wonder, almost envy. It was almost as though Oakland had become the St. Petersburg of our cycle of struggle. Some of those I spoke with thought about how we could do the same, considered what they could do here to make it happen, and wondered when it would all come to Philly.

There is a tendency that will argue that the best way to deepen the movement here would be to do exactly what they did in Oakland: brace for a spectacular confrontation that might ultimately advance the movement further. The strategy is simple, teleological, formulaic: if we wait until the November 15 eviction, then there will be a confrontation; if there is a confrontation, then we can gather more support; if we have more support, then we can be like Oakland. Though it’s certainly not the only sentiment, it does seem to be gaining some ground. There is talk at Occupy Philly about “fortifying” the occupation in anticipation of a crackdown. The formal decisions will come Friday.

To look to Oakland for inspiration is one thing; to fetishize it into an immutable paradigm is quite another. The strategic line tossed around in Occupy Philly threatens to reify an inspiration into a formula. What worked there may not work elsewhere; the strategies developed in one city should not be perfunctorily applied in another. Philadelphia is not Oakland. In Oakland, we are dealing with a unique history that stretches from the 1946 General Strike to the Black Panthers to Oscar Grant.

The 1946 action, which began with women working at downtown retail stores, saw the consolidation of nearly the entire Oakland working class; just two decades later, the Black Panthers provided a model for other groups to follow, paving the way for a unique alliance between Asian, Native American, and Chicano communities; the murder of Oscar Grant in 2009 sparked a wave of uprisings that rocked the city; and low housing prices since then have allowed militants from the 2009 student movement to enter the fold. And let’s not forget the historic role of the dock workers who shut down the ports against South African Apartheid and the imprisonment of Mumia Abu-Jamal. These contradictions have produced a situation that made Oakland the “weakest link” in the American conjuncture; they produced a situation in which confrontation with police could become a radicalizing force. Philadelphia has not yet accumulated its own contradictions in the same volatile manner; it has its own history, its own struggles, and its own particular composition. It needs its own strategies.

The abortive October Putsch of 1923 is a valuable illustration of some of the risks inherent in this kind of thinking. In 1923 the French invaded the Ruhr in order to secure reparation payments from the German Weimar Republic. The invasion conjoined with soaring unemployment, rampant inflation, heightened proletarian militancy, and a general legitimation crisis, to produce a dangerously volatile situation. Sensing an opportunity, the Soviet Union, along with the German Communist Party (KPD), decided to plan an insurrection modeled on the successful Bolshevik paradigm: the Russian October Revolution would provide the formula for the German October Putsch. All sides assumed that if it worked in St. Petersburg, then surely it would also work in Berlin.

But the whole affair resulted in a catastrophic fiasco. Sensing that it probably would not get the support it needed, the KPD leadership called off the uprising at the last minute. Hamburg received the news too late and its insurrection was crushed in isolation. Germany was not Russia and 1923 was not 1917. The contradictions that marked one conjuncture were entirely different from those that marked the other; it made no sense to apply the same general strategy to both situations.

This lesson should be borne in mind today. Each locality is marked by its own distinct set of contradictions; each has its own history, its own rules, and its own dynamic. This does not mean that we should ignore everything outside of our own city; nor does it mean that different struggles can never resonate with one another. Louis Althusser, reflecting on the uniqueness of the Russian Revolution, tried to find a more productive way of thinking through this problem. In For Marx, he argued that revolutions do not happen when some essential contradiction explodes; they happen when a plurality of distinct contradictions encounter one another in a way that amplifies their potential explosiveness. In other words, we can’t enshrine the contradictions of one locality as the essential ones; we have to find strategic ways of “fusing” these unique contradictions in a way that detonates them all. Revolutions, to put it another way, are overdetermined. We have to create a situation in which:

a vast accumulation of “contradictions” comes into play in the same court, some of which are radically heterogeneous – of different origins, different sense, different levels and points of application – but which nevertheless “merge” into a ruptural unity…

This means, before all else, discovering which contradictions seem to predominate at a given moment:

Oakland has the fifth largest port in the country; so its distinct contradictions produced a situation in which a mass march on the docks could have a dramatic political effect. Philadelphia has its own set of peculiar characteristics – the highest concentration of universities in a single city is one – and the contradictions that emerge from this will have to play a role in Occupy Philly’s next steps.

Salar Mohandesi is a graduate student at UPenn and an editor of Viewpoint.