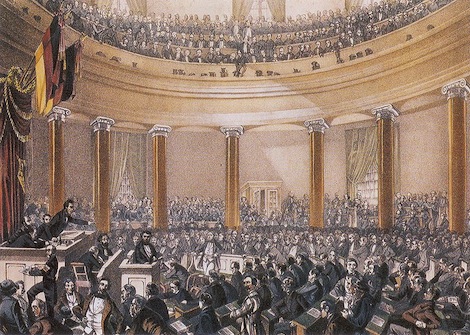 Coming out of the city on the train one morning, I passed by Occupy Frankfurt – maybe three dozen large tents, a concentrated but steadfast group. It was pouring rain – my run from the tram to the main train station left me soaking, despite umbrella – but the encampment seemed unperturbed, perched as it is underneath some of the largest symbols of Europe’s finance sector.

The specificity of Occupy broke US borders in October and landed in London, Berlin, Frankfurt. As Axel Honneth has recently pointed out, Occupy is a new form of collective agent – we might add that its model reacts differently with different settings.1 In the US, Occupy literally fills in a hole in the political-economic logic of the present. As we learned this week, even politicians of the highest level in the US are “protected” from the internal dealings of the Federal Reserve (where “internal” includes the member banks, emphatically not public corporations). It is as if Occupy had responded to this conspiratorial state of affairs in advance, pointing out the lack of the slightest public or institutional focus on the realities of finance politics. Not that we don’t talk publicly of finance – we do that almost constantly. But the political element of this discussion has been missing, drowned in the technicalities of “survival.” What Occupy occupies, we could say, is a logical hole in the global financial landscape. It stakes its claim where the voice of politics seems to disappear into the machinations of an analytic economics. To paraphrase one of the movement’s better slogans: you can’t evict a necessity.

To see that necessity in corporeal form this morning was striking. Military-grade tents protected solidarity from the cold downpour in the traditional center of Germany’s war between capitalism and critique. The encampment lay between the finance district and the Paulskirche, where the 1848 revolutions in Germany began. And Honneth is now director of the Institut für Sozialforschung, the root institution of what came to be known as the Frankfurt School. Frankfurt – already an emancipated city-state when Goethe was born there in 1749 – is the present contradiction between financial technics and political insistence incarnate. Incarnate – but also transformed. Occupy occupies differently in Europe, and I want to suggest a few points of difference here.

The biggest headlines here are about saving the Eurozone’s currency-based unity. Internal controversies – should the European Central Bank issue bonds? what percentage of GDP is appropriate as debt-share? – are international, but the sense of national standpoint is strong. (There is much talk of the double-national juggernaut “Merkozy.”) In fact, the controversies are carried out in an international dialogue which is nevertheless only half institutionalized. The Commission in Brussels has relatively little political power in the United States of Europe, which is an ad-hoc democracy of states. The reality of the Eurozone is precarious because it is not clear that any political unity remains in the event of a systemic crisis.

To save the Union, the economically stronger members have implicitly supported regime-change in the weaker members, leading to the “correct” result that technocrats like Monti in Italy (whose experience, as the media do not tire of pointing out, is in the Commission, not in Italian parliament) must be entrusted with the task of reduction of debt below a certain, undetermined point. (Germany’s debt, standing in the low 80s of percent of GDP, is itself already far outside the margin established in the constitution.) The reality of the Union wavers between its economic and technocratic forms and its ad-hoc political internationalism. The Union is therefore perhaps the best case-study in the emergent forms of finance capitalism. While in the US we face congressional deadlock and the increasing secrecy of the executive branch (and its cooperation with finance in particular), in Europe Occupy responds to a less unified, less militarized, less executive political-economic reality. If Occupy is international – if it wants to become global – its possibilities in Europe must be explored for just this reason. As de facto international as the US is, Europe’s negotiations present us with a sort of purer example of finance capitalism’s political superstructure. In the continual redrawing of internal and external lines in a space singularly reactive to both national and local political exigencies and financial “necessities,” we are witness to financial class politics, a politics which articulates itself as a classless reduction to technical questions, to economic “health.”

Occupy’s US branches are already reacting to an institutional lack: no major US institution makes any pretense to leveling wealth inequality, nor to a confrontation with finance in any critical register. In Europe, this is also true, but with a difference. Where in the US the possibility of a left-wing party in Congress robustly defending some other balance between finance and industry is certainly thinkable (witness Robert Reich’s nostalgia for post-war capitalism), in Europe the “new collective agent” is responding to the positive need for something entirely new: a “Finance Left,” a Left for a new mode of production, necessarily international, which must seek forms of collectivity and institutionalization in response to the half-institutionalized financial unit “Europe.” This movement, which Occupy has conjured the basis of, needs to recognize its reality, but not its ideology, in finance capital. For that, it must look to Europe.

US Occupy might take a few questions into account on this basis. Is the movement’s interest international? Is its finance-critique aimed at the institutional depth and breadth of finance capital as such? If so, I think it should keep an eye on Europe, both on Merkozy and on the protests here, for the simple reason that the economic reality of finance-capital is reflected in the national/international contradiction in Europe at the political level. Europe presents the inter/national politics of finance in a literally exemplary manner, bearing the familiar marks of financialization in the economy: precarity, mobility, dissolution, technicality, reduction of decisions to the logic of “survival.”

The “problem” of Europe’s full technical institutionalization in the Commission and political ad-hoc (dis)unity is not negative, in finance-political terms, but enabling. Europe crystallizes the asymmetrical relationship between power’s base and its institutionalization, precipitating in a struggle over national sovereignty which is explicitly pushed into the background by the “pragmatists” Merkozy. The unilateral clarity of the military-financial complex of the US and its Bretton Woods institutions (the WTO, the IMF, and the World Bank) now has a parallel model, multilateral finance politics in Europe. If the crises leave the US in a middling position in global geopolitics, we will be confronted with the primacy of this latter form. The Global Left might need not be further institutionalized, at least not as its first task, but it certainly needs to define its power-base. If the industrial struggle was based on the ownership of surplus-value – who gets the results of human productivity’s excess – then financial struggle might be about debt. Perhaps the analytical focus of the international movement must be the (ultimately) dollar-value each of us – and each nation – must bear. The uncanny possibility that one could sum up negative is for all that not the less real. How does a global collective propose to address real negative quantities?

Leif Weatherby is a graduate student at the University of Pennsylvania, and currently a guest in the department of philosophy at the Humboldt University in Berlin.

is an Assistant Professor of German Studies at New York University.