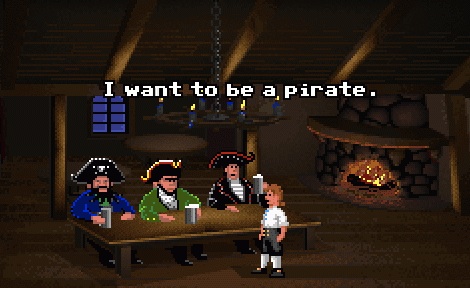 You already know how piracy gets you stuff for free while keeping your dwindling financial resources away from evil multinationals such as Time Warner, Sony, and Apple. But as we’re finding out, piracy provides a lot of other positives, resources that we’ll need in the coming struggle. Here are a few:

1. Piracy educates. Adrian Johns, who literally wrote the book on piracy, credits scofflaws with spreading the Enlightenment throughout 17th century Europe, in contravention of established publishing rights. Right now, a cluster of students near you are setting up their own crash course in radical thought using a trove of PDFs they’ve snagged from a pirate e-library. I’m not going to name names publicly, lest I bite the hand that just yesterday fed me a .zip file of everything Stuart Hall has ever published. But you can find what you’re looking for without too much trouble using Google. Or why not read something free, legal, and subversive at marxists.org?

2. Piracy builds local infrastructure. Brian Larkin’s work on Nigerian video piracy shows how domestic infrastructure “preys on the official distribution of globalized media… but at the same time creates possibilities for new actions.” Nigerian distributors got their start by dubbing Hollywood flicks. (Before we shed a tear for Jerry Bruckheimer, note that the MPAA stopped releasing films in Nigeria in 1981.) After their distribution networks stabilized, they moved on to releasing cheap domestic films, which now dominate the Nigerian market. A similar thing happened with bootleggers of hip hop – now, instead of going through major label hassles only to have their core audience rip them off, the biggest rappers work with bootlegger networks, releasing mixtapes on whatever beat they like, and usually crafting a better listening experience than the focus-group feel of official albums. In DC, you can’t even find “official” releases of local urban music – practically all go-go sales go through informal channels. Buy local, buy pirate.

3. Piracy is keeping you free. Pirates are supremely interested in privacy – just check out the platform of Germany’s Pirate Party. They are breaking the law in an act of civil disobedience and they don’t want to be caught by trackers, bots, or hackers working for the state or business. Their interests are perfectly aligned with revolutionaries. Whether you want to order LSD online or trade strategies for taking down the Egyptian military regime, you’ll probably want to use Tor or another form of anonymizer. The electronic nooses are tightening, and pirates and hackers – not governments of, by, and for the 1% – are the ones who will keep us breathing.

4. Piracy is cheap. As Ravi Sundaram points out, “pirate modernity” is the only one the masses of poor countries get to experience. But this doesn’t just apply to the Global South. As the working classes in rich countries get squeezed, we’ll find piracy an increasingly useful pad to our incomes while we save up for that dentist visit. I used to buy a lot of records. And though my income has dipped and my expenses have gone up, I still want to listen to music. So I do. Should I feel guilty? Maybe, but it’s not like I have the money to throw at limited run twelve-inches. And I find myself listening to more and more freely distributed mixes and remixes on sites like SoundCloud and 4shared. I’m sure that some sumptuous productions are coming out of nice studios, but really, I’m on more of a 16-year-old-Dominican-kid-with-Fruity-Loops budget. Larkin describes pirate video as degraded and distorted: that piracy has a form and an aesthetic in addition to an economy. But every form is its own acquired taste – for instance, I still hate HD. So learn to love the sloppy energy of rough reggaeton remixes, and develop a fondness for the Russian camcorder guy munching popcorn through the latest X-Men sequel – after all, we’re all on the same side.

Gavin Mueller is a graduate student in cultural studies at George Mason University. He lives in Washington DC.