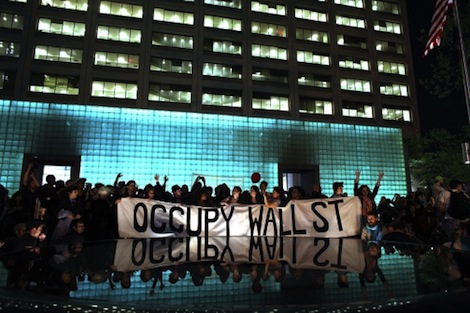 May Day was a gamble for Occupy Wall Street, and a necessary one. Instead of heralding a national renewal, springtime has found Occupy short of ideas and running on vapors. Life after the encampments has not led to a generalization of occupations, and the prospect of reestablishing them in their initial form is remote. The 1st of May was logical timing for a revival – or at the very least, a lifeline, a confirmation of vitality, an open door. Bolstered by the call for an expanded general strike, May Day 2012 smelled of hope, but also desperation. Our sense at the outset was that failure in the streets – whether the result of low turnout, police out-maneuvering, or flat repetition of gesture – would radiate far beyond New York, effectively bringing the movement to an impasse. Although our fears ultimately proved unwarranted, there was little in our experience of May Day that augured an escalation of struggle; no spark to set the summer ablaze.

Our May Day begins at a morning gathering in Bryant Park, the staging ground for flying pickets in and around Midtown. En route from the subway, we see nothing out of the ordinary above or below ground, nothing to suggest that OWS’s ambitious agitprop campaign – which called for a ban on housework, school, wage labor, the use of money, and even “data” – had been heard among the broader public. We arrive at the park shortly after noon, where a crowd of several hundred is milling about, flanked by a cadre of guitarists rehearsing for the “guitarmy,” all under the watch of a heavy police presence. Though we’ve been expecting something more than the usual festive tedium of standing and ambulating in proximity of the police, the vibe here disappoints; we decide to move along.

In search of livelier action, we catch the F train to 2nd and Houston, where a group of marchers from Brooklyn had stalled out at Sara D. Roosevelt Park after successfully crossing the Williamsburg Bridge. In anticipation of a “wildcat march” (code word for black bloc) scheduled for 1pm, police have hemmed in the crowd, numbering about 200, on three sides, leaving the park itself as our only egress. As we wait – again, for something to happen – a bike bloc rides circles around the park, drawing a flotilla of scooter cops in its wake. (A diversionary tactic? We think so.) Against this backdrop, a group of local dudes continue to play hoops as the crowd gathers, serenely oblivious to the masks and banners and the tense rat-a-tatting of drums.

Just as we’re about to lapse into despair at the lethargy of it all, the march lurches into gear, throwing itself in the direction of the police line. What ensues in the next few minutes is a confused scrum of blue- and white-shirted cops, media, and demonstrators, during which the head of at least one occupier emerges bloodied from the fracas. Then, as if by collective reflex, the back end of the march breaks into a headlong dash through the park, accelerating past basketball and tennis courts, easily outpacing the cops. As we spill into the streets, we begin chanting: “From Oakland to Greece, fuck the police,” and the like. The march holds formation as it veers into Chinatown; petty black bloc gestures commence, some graffiti here and there, newspaper boxes dragged into the intersection, but the overriding priority is evasion. The presence of cops at our rear sends us hurtling past befuddled vendors and shoppers. Scuffles break out as several scooter cops try to force us onto the sidewalk, but to little avail. Half an hour later, the march has run its course at Washington Square Park, where wildcats and cops alike disperse into the verdant milieu.

After gathering our breath for a moment, we learn that an unpermitted march has departed from Bryant Park en route to Union Square. We set off uptown, reaching the pop-up “Free University” at Madison Square Park on 23rd St., the most forthrightly affirmative expression of OWS’s ethos so far this May Day. A comrade who has been there since the morning describes a scene of earnest discussion and co-education, students and workers rubbing shoulders with academic types, including Occupy’s preeminent Davids, Harvey and Graeber. We’ve only just settled in when the march from Bryant Park arrives along 5th Ave., sweeping us up in the slow slide downtown. The police are an anodyne presence; they seem content with letting the march proceed in the streets since its destination is the permitted and heavily controlled rally at Union Square.

The Union Square rally strikes us as a necessary compromise with labor organizers and community groups, providing a safe staging ground for an afternoon march to the financial district. Slowly filling through the afternoon, the park plays host to a crowd of several thousands by 4pm. From our perch in the shade, the amplified sound system seems out of place here, as do the range of speakers, a hodgepodge of the usual boosters and exhorters. The scheduled entertainment, including Tom Morello, Dan Deacon, and Das Racist, strikes us as redundant; more significant than this dutiful, and frankly pitiful, sampling of contemporary spectacle is the palpable liveness of our gathering. Contrary to our earlier pessimism, the march is shaping up to be a gargantuan affair. And so, at around 5:30pm, we set off in a circuitous route out of the park, channeled through a labyrinth of metal barricades on our way towards Broadway, our yellow brick road to Wall Street.

Along the first several blocks of the march, police presence is so thick as to give one pause. But doubt about our sovereignty in the street fades as the extent of our numbers becomes clear; according to some reports, the march comprises around 30,000 occupiers, activists, rank-and-filers, and allies, encompassing over 30 blocks at any given time. The walk down Broadway is slow, festive, and congenial. We find ourselves near the head of the march, wedged between an immigrants’ rights bloc, the musicians’ union marching band, and the OWS Arts & Labor subgroup. The union presence is sizable, but the banners and slogans that punctuate the crowd clearly reflect the voice and concerns of OWS. No one misses the point: this march is more a vigil for the evicted encampment than a celebration of working-class power. Onlookers seem mostly stunned, documenting the procession with iPhones held reverently aloft, as if unsure how to interact with the sudden appearance of history in their midst.

It takes several hours for us to reach the financial district, where night has fallen and the police presence is even more overwhelming. A vast army of cops has blocked off Wall Street and Zuccotti Park, ruling out any prospect of our storming capitalism’s stony fortress. As we reach Bowling Green, an amplified voice informs us that our permit has expired. The OWS “after-party” scheduled for 8pm seems to have been thwarted. Meanwhile, the bulk of the march is still stretched out along Broadway. It is a strange scene: with a litany of union speechifying echoing over the now-unpermitted sound system (a disembodied reminder of our compromise with the establishment Left), the march fizzles into the darkness and into the subway stations. The only exhortation to elicit cheers from the crowd is the Transit Workers’ Union’s pledge not to transport arrestees, or rather, as the spokesperson puts it, “political prisoners.”

Eventually a segment of the march finds its way to 55 Water Street. Here, in a postmodern amphitheater lodged between glass-framed skyscrapers, we join a thousand or so occupiers in a surreal people’s assembly, the culmination of the day’s planned agenda. Arrayed before a massive reflecting pool, speakers take turns praising the day’s successes and pledge to hold the park indefinitely, their voices carried by a three-tiered people’s mic. The situation is precarious: several hundred police in riot gear stand along the perimeter of the park, poised to enforce the 10pm closing time. As the rhythm of a drum circle accelerates into Dionysian frenzy, and as speakers intone odes and epithets worthy of Attic drama – one woman strikes the reflecting pool with her fist in a gesture intended to shatter illusion – our affinity group takes a decision to leave before the real tragedy arrives. The following day, we learn that a handful of occupiers were able to maneuver from 55 Water back to Zuccotti Park, a terrain with more and better exits and fewer restrictions on overnight use, at which point the crowd dwindled to several dozen and was mostly left alone by the police.

On the way back to Philly, our thoughts quickly turned to the future of OWS: what will come of the movement’s first public holiday, May Day 2012, and its attempt at collaboration with organized labor? How, if at all, will the lessons of springtime be integrated in the months ahead? Though it would be wrong to say that our experience on Tuesday wholly confirmed our initial disappointment, we cannot avoid sounding a note of concern. However one spins it, this year’s May Day did not fulfill its organizers’ aims – or at least, it did not satisfy the aims outlined in the call for a general strike, a day “without the 99%.” Unlike the labor unions, Occupy has no power over the sphere of production; its call to strike is only efficacious as an invitation to direct action outside the workplace, not as a prohibition on wage labor, schoolwork, housework, and so on. On this score, OWS might have looked to Occupy Oakland, which, along with other West Coast occupiers, executed major port shutdowns this past fall and winter. One way or another, OWS will have to address its offensive game in the coming months. This year’s May Day was a test of the movement’s strength, but it passed only narrowly, by the force of numbers alone. We hope next year’s march will be not a test but a demonstration.

works in the education sector in Philadelphia.

is a graduate student at UC Berkeley. His writings on the Occupy movement have been published in the n+1 Occupy! Gazette.