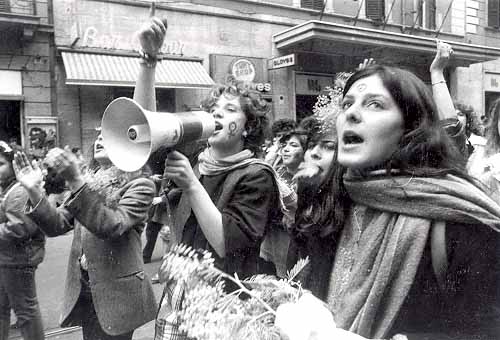 In an era when the exploits of Silvio Berlusconi’s “private” life seem to have categorically obliterated any progress towards sexual equality achieved during the Italian feminist movement of the 70s, it is essential to remember what was once accomplished. Although second-wave feminism was already a well-established network of debates in the U.S. by 1970, Italian women influenced by workerist writings of the feminist ilk, most notably Mariarosa Dalla Costa and Selma James’s The Power of Women and the Subversion of the Community (1972), set out to initiate battles over issues such as abortion and divorce.1 Feminist currents both from within and independent of workerist movements then spread with a fierce momentum that would endure through the decade.

From the inadequate patriarchal rubric of the New Left, from the ashes of male-dominated workerist organizations such as Potere Operaio, and later Lotta Continua, women throughout Italy organized autonomously, on the basis of the inherent connection of reproduction and gender roles to class struggle.2 It was the problem of marginalization of women within these movements, along with the larger question of unpaid domestic labor, that directed many feminist inquiries. Silvia Federici has said, reflecting on her difficulty reconciling her experience as a woman with the rhetoric of these organizations, “I was unwilling to accept my identity as a woman after having for years pinned all my hopes on my ability to pass for a man.“3 An organized collectivity of women independent of the uniform assimilation to a male-driven class perspective became necessary, since women’s work was to this point largely confined to the domain of reproduction, but remained an equally essential yet categorically unique form of production in the greater sense.

Mariarosa Dalla Costa has described how, in the 1970s, Italian feminism largely took one of two positions: a kind of generalized, overall “self-awareness” or a workerist-driven feminism. The latter took shape as Lotta Femminista, which organized into a more substantial international movement. The focus of their attack, housework, was described in Federici’s Wages Against Housework as “the most subtle and mystified violence that capitalism has ever perpetrated against any section of the working class.”4 In 1972, Dalla Costa, Selma James, and others formed the International Wages for Housework Campaign around the notion that women held a significant power as producers of the labor force itself – and that through the refusal of this production, they engaged in a form of social subversion that could lead to “a radical transformation of society.”5

However, Federici has since acknowledged this kind of utopian thinking as damaging to the feminist movement:

One of the major shortcomings of the women’s movement has been its tendency to overemphasize the role of consciousness in the context of social change, as if enslavement were a mental condition and liberation could be achieved by an act of will. Presumably, if we wanted, we could stop being exploited by men and employers… revolutionize our day to day life. Undoubtedly some women already have the power to take these steps… But for millions these recommendations could only turn into an imputation of guilt, short of building the material conditions that would make them possible.6

In an interview accompanying the volume Futuro Anteriore, Alisa Del Re describes how she began her own path towards the analysis of women and work, initially as a political science student and research assistant to Antonio Negri in the late 1960s.7 Encounters with the methods of workers’ inquiry, and later the writings of Tronti and Marx, became points of reference that would inform Del Re’s involvement with Potere Operaio until its dissolution in 1973. Without officially crossing over to Autonomia Operaia like many of her comrades, Del Re remained in somewhat close proximity to the group, while beginning to address issues from a feminist perspective that was unique for this period, particularly regarding social services and the relationship between work and personal time.

Del Re reveals a subjectivity that informed her position on welfare programs – a position that, stemming in large part from her own need for subsidized childcare while navigating the workforce, would unintentionally oppose the views of Dalla Costa and others driving the Wages for Housework movement. While Wages for Housework sought compensation for domestic labor, Del Re argued for subsidized childcare and other such social programs so that a woman could have a life outside of working, both in and outside of the home – not because she disagreed with Wages for Housework, but because their demands did not apply to her own situation as a woman choosing to subsist within the workforce rather than in the home. She describes how her very position as a working woman assigned her to the margins of the workerist movement, while the women of Wages for Housework were demanding rights from within their imposed “terrain” – that of reproduction:

…the issue of wages was perhaps more “revolutionary” but from the political practice that Rosa [Dalla Costa] endorsed it was difficult to understand who was demanding these wages and when… maybe my issue was much more reformist even though it is true that we annoyed a few people when we occupied local government meetings, demanding the construction of nursery schools and proposing concrete forms of ‘liberation from housework.8

It is worth noting, however, that while the positions of Wages for Housework and Del Re were seemingly in opposition, they are perhaps better described as parallel streams of struggle, progress in both arenas constituting a necessary condition for women’s autonomy. In the first place, Wages for Housework recognized housework as work, and thus, the strategy of “getting a job” as a means of liberating women from dependence on men’s wages, as Federici would later reflect, alienated women who worked because their families need the added financial support “and not because they consider it a liberating experience, particularly since ‘having a job’ never frees you from housework.“9 Furthermore, Del Re’s view on the reclamation of personal time supported by state-funded child care provisions offers the only possibility of relief from what would otherwise be a near-24/7 work week, waged or not, for working-class women. Years after Wages for Housework, Federici recognizes the mutual dependence of these two conditions:

…as long as housework goes unpaid, there will be no incentives to provide the social services necessary to reduce our work, as proved by the fact that, despite a strong women’s movement, subsidized day care has been steadily reduced through the 70s. I should add that wages for housework never meant simply a paycheck. It also meant more social services and free social services.10

In a later piece entitled “Women and Welfare: Where is Jocasta?”, Del Re describes the labor of reproduction as “a specific relation between women and the State” that is separate from the labor market and that has been inadequately supported and studied.11 The welfare system, despite “its limitations on the quality of life,” she proposes, “liberat[es] the labor of reproduction from its dependence on another person’s salary,” in other words, the labor of production.12 Thus, Del Re proposes that since women control the means of reproduction, we “must find a way to present [our] bill” – by making “visible the labor of reproduction in its totality” and by underlining “its centrality with respect to production and the market.” As she has continued to assert, this begins with a reorganization of one’s time.13

Interestingly, situated upon this same imposed terrain were both the subjects and objects of a year-long research study regarding work and family, culminating in the publication of Le sexe du travail: structures familiales et système productif (Grenoble: Presses Universitaires de Grenoble, 1984). In an article for the journal Primo Maggio, Del Re examines this work with a favorable view on their investigations, as women researchers, into the sexual and social divisions of labor. Translated here, Del Re’s piece represents in itself an evolving vision of these divisions that does not, as she writes, “signal a marginality.”

In “Women and Welfare,” Del Re elegantly states the importance of the woman’s role as both subject and object:

It is crucial, therefore, that women’s lives – their existence, their nature, as well as their activities - become an integral part of philosophical and intellectual discourse, so that the acknowledgment of female subjectivity, constructed as it is in multiple symbolic and material loci, can reveal the partiality of a vision of the world that even today is considered universal.14

Like other projects of the workerist movement, Primo Maggio as a publication reveals conceptual layers ranging from historiographical record to scholarly periodical to political organization. As Primo Maggio’s Sergio Bologna writes in his review of Steve Wright’s Storming Heaven, the journal focused on maintaining a subject position “within a network of initiatives of self organisation at the level of political culture and formation ‘at the service of the movement.’ ”15 In an interview with Patrick Cuninghame, Bologna describes Primo Maggio’s search for new methodologies, in contrast to the efforts at party organization by Negri and Autonomia Organizzata:

Primo Maggio was not even a political elite. Rather, we had refused our role as a political elite to put ourselves instead in the role of that techno-scientific intelligentsia which excavated within the disciplines. So, we wanted to excavate within the historical disciplines to make history in another way. You read Primo Maggio and it is not a political journal, in the sense that it is a journal … for the transformation of historical methodology. In the sense of transformation also of historiographical language which has an enormous importance in political language.16

The idea of a “woman-science,” women (and sexual divisions of labor) as a topic of research by women researchers, is the product of this strategy, reconstructing a subject through its methodologies.

2. Lotta Continua, in fact, aided in its own demise through its betrayal of female LC militants by sabotaging an abortion march in Rome in 1975. See especially Red Notes’ Italy 1977-8: Living with an Earthquake, chapter 19, and the Big Flame Women’s Group pamphlet Fighting for Feminism: the ‘Women Question’ in an Italian Revolutionary Group.

5. Mariarosa Dalla Costa, “The Door to the Garden: Feminism and Operaismo,” reprinted on libcom.org.

11. Alisa Del Re, “Women and Welfare: Where is Jocasta?” trans. Maurizia Boscagli in Radical Thought in Italy: A Potential Politics, eds. Michael Hardt and Paolo Virno, (Minneapolis: U Minn. Press, 1996), 101-2.

16. Patrick Cuninghame, “For an Analysis of Autonomia: An Interview with Sergio Bologna.” Mexico City, June 1995.

is a special collections librarian at San Diego State University, where she has taught courses on using primary sources to research feminism and gender roles.