is a special collections librarian at San Diego State University, where she has taught courses on using primary sources to research feminism and gender roles. 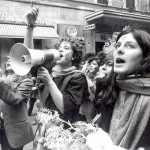 In an era when the exploits of Silvio Berlusconi’s “private” life seem to have categorically obliterated any progress towards sexual equality achieved during the Italian feminist movement of the 70s, it is essential to remember what was once accomplished. Although second-wave feminism was already a well-established network of debates in the U.S. by 1970, Italian women influenced by workerist writings of the feminist ilk, most notably Mariarosa Dalla Costa and Selma James’s The Power of Women and the Subversion of the Community, set out to initiate battles over issues such as abortion and divorce. Feminist currents both from within and independent of workerist movements then spread with a fierce momentum that would endure through the decade.