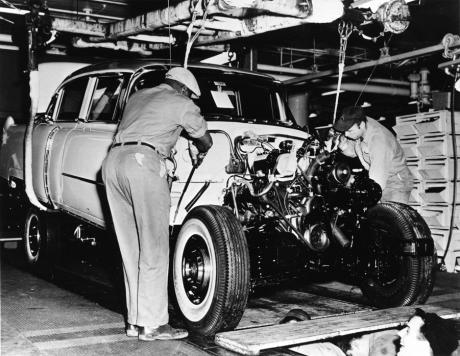 The American Worker by Paul Romano
Translated from the American

We present here an unprecedented document of great value about the lives of American workers. This appraisal stems not only from the fact that it definitively puts paid to both the absurd claim that American workers don’t have class consciousness, and the myth of the comfort and luxury of the American proletariat. This would already be amply sufficient reason to make a point of publishing the document by the worker and militant revolutionary Romano. It is indispensable that a credible voice is raised to destroy the barefaced propaganda of Hollywood firms which show us workers in bathrooms, or those of Reader’s Digest which depict at every opportunity the benefits of class collaboration.

The merits of this small pamphlet are much more profound. Every worker, regardless of “his nationality” of exploitation, will find in it the image of his own existence as a proletarian. There are, in fact, deep and consistent characteristics of proletarian experience that know neither frontiers nor regimes. Furthermore every worker, and this is precisely because it’s the reflection of the exploitation “without formalities” [sans phrase] that is given to us, will be filled with a boundless confidence in the historic destiny [destinées historiques] of his class, because he will see there, like the author, that even at the moment when the worker is in the deepest despair, when his situation appears to him to be insoluble, his own “everyday reactions and expressions” reveal that he is on “the road to a far-reaching change…”

The translator of this small pamphlet himself has worked several years in the factory. We was struck by the accuracy and the important implications of every line. It is impossible for a worker to remain indifferent to this reading. It is even more impossible to translate such a text in an indifferent, or even routine, manner. At several junctures, it was necessary to take a considerable distance from the letter of the English text to provide a really faithful translation. Some American popular expressions have an exact correspondence in French, but embedded in different imagery. Even in his descriptive style, Romano uses a proletarian optic. It was necessary to find a corresponding style in French, even if it meant straying from the text. Admittedly, this translation is not elegant, but it is the most faithful we could have given.

Even more in translating than reading one is struck by the concrete universality of the proletarian condition, and we hope to have respected this expression.

In our eyes, it is not by accident that such a sample of proletarian documentary literature comes to us from America, and it is also not by accident that it is, in some of its deepest aspects, the first of the genre. One can be certain that the name Romano will stay in the history of proletarian literature, and that it will even signify a turning point in that history. The most industrialized country in the world, with the most concentrated proletariat, should give rise to new and original talent. That is a sign of the vigor and the depth of American workers’ movement.

was a member of Socialisme ou Barbarie.