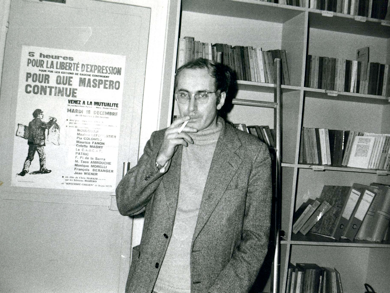 The 1950s-1970s are familiar to many as a time not only of intense political struggle, but of global intellectual ferment – in France, anti-imperialism stirred the imagination of young radicals, Marxism was hotly debated, and new styles of thought were elaborated. Less familiar, no doubt, are the highly material – although now largely forgotten – networks that collected, edited, refined, circulated, and popularized those ideas. At the center of this dynamic nexus stood the often hidden labor of François Maspero. Easily one of the most important French editors and publishers of the 1950s, 60s, and 70s, he helped shape an entire intellectual terrain.

The most pressing problem for me is knowing whether publishing is a means of revolutionary activity.

This is what interests me, more than ever, in the books that I publish: not the empty gesture of an isolated individual, but the outcome of a long collective process that opens onto another.

An Interview with Maspero: “A Few Misunderstandings” | François Maspero

I only crossed the authors’ paths, I was a little like a sponge absorbing something and then letting it out again. As it happened, I provided some format for their work – but nothing more.

Editions Maspero published an important part of the revolutionary resurgence, following a productive form of revolutionary pluralism that Maspero became very attached to, and which could also determine the content of the bookshop shelves. It served as a laboratory and a favored tribune for a far left in formation during the 1960s and 1970s.

is a member of the editorial collective of Viewpoint. He lives in Seattle.