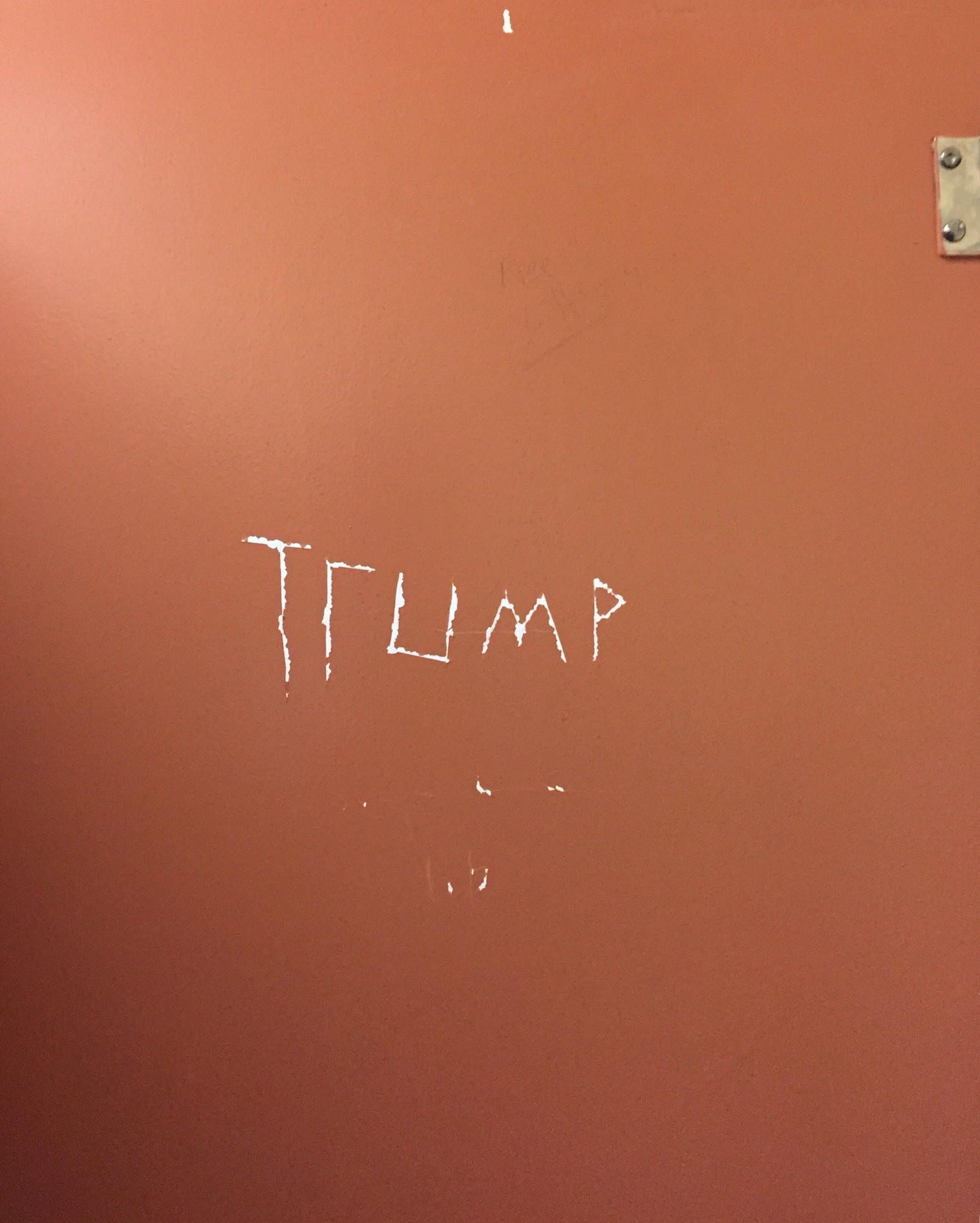 To write poetry after Trump is barbaric (to paraphrase an oft-quoted aphorism so deeply felt, even though some have argued that we still do not well understand it). Indeed, Theodor Adorno, the German philosopher and cultural theorist, once famously remarked: “To write poetry after Auschwitz is barbaric.” Of course much ink has been spilled over what, exactly, he meant by this statement – a statement that even Adorno himself partially retracted. We take Adorno to mean that poetry after Auschwitz could not exist as such (i.e., poetry qua poetry), since poetry was a part of, even complicit in the very culture that produced the aporia of Auschwitz, not to mention settler colonialism, slavery, the middle passage, so-called “Manifest Destiny,” and the genocide of millions of indigenous peoples. For Adorno, then, poetry would have to be made anew.

The barbarism of the Nazis at Auschwitz, however, should not be confused with those to whom the descriptive and proscriptive term “barbaric” has historically been anchored. Supposing that the word “barbarian” is contained in barbaros (or “foreign”), then there is in the etymology of the term a different sense of which the meaning would seem to refer to the unintelligible speech or language of foreigners. In part this is because here we have mostly the ancients to thank—indeed, the word barbaros was widely used to discern between Greek-speaking and non-Grecophone (and especially Persian) peoples of the ancient world. The barbarian, then, was she or he who sounded “foreign,” “strange,” “ignorant,” “rude” and/or “wild.” Alas, this originary encounter of linguistic difference, of unintelligibility and non-translatability, seems to have had a lasting impact on the long, slow, violent, and modern histories of human suffering mentioned above. In a sense, poetry and politics after Auschwitz must be barbaric – that is to say, they must be foreign to the hegemonic language and culture that produced the Holocaust. Indeed, poetry after Auschwitz is barbaric. Poetry after Trump is barbaric. This is a clarion call to poet-barbarians everywhere – especially to our readers in Mexico and Syria, and here at home in Flint, Michigan, in Ferguson, Missouri, and at Standing Rock.

Poetry has always been the domain of the barbarian – again, even though there is in the popular use of the term a pejorative sense not unconnected to other conservative keywords – “illegal alien” and “terrorist” both come to mind. Poetry is, quite literally, barbaric: as art, poetry relies on a partial turn away from total comprehension – what Giorgio Agamben has called the “reciprocal catastrophe of sound and sense.” In its barbarism, poetry stretches the voice to make it seem “other” than itself; the poet, while writing, becomes conscious of the multiple selves her voice inhabits, the long and complex histories of language and being that comprise the individual self – “an aesthetics of the earth,” as Édouard Glissant once put it, or the rhizomatic poetics of relation. Walt Whitman’s “barbaric yawp” was not the celebration of a naïve authenticity. It was the capacious voice of a barbaric democracy speaking against walls, checkpoints, borders, and detainment centers. He amplified this boundlessness through his long lines and endless catalogues. A barbaric poetry dedicates itself to translation rather than to self-preservation. A barbaric poetry does not claim to stand in for others, as Whitman is often misread as doing. It denies all claims to a single voice, and rejects fictions of purity, supremacy, and originality.

Today such claims are rampant, and poetry is perhaps uniquely poised to defeat them. It is important not to see Trump as an exception, but instead to understand him as part of a wider democratic and demagogic crisis in the United States and in Europe. The Europe of Nigel Farage, François Hollande, and Angela Merkel is the Europe of technocratic oligarchies that serve the caprices of financial dictators. Trump’s lineage continues with Marine Le Pen; it begins in Atwater and others whose racism and xenophobia Trump no longer has to hide. Against Trump’s perversion of the demos, therefore, we assert the barbaros. Living and teaching in the Upstate of South Carolina, we have witnessed first hand the poetic license given to the enemies of the barbaros: the Ku Klux Klan, for example, recently distributed recruitment fliers at the university campus where we teach. The oppression of others occurs not only through violence, however, but also through the systematic devaluation of thought and knowledge, forms of expression, and ways of living. Against that violence, poetry is aligned with the historical struggles by American and American-based artists and activists of barbaric democracy: Ida B. Wells-Barnett, W. E. B. Du Bois, Claude McKay, Claudia Jones, James Baldwin, Fannie Lou Hamer, Amiri Baraka, Fred Moten, Don Mee Choi, Juliana Spahr, Daniel Borzutzky, Nathaniel Mackey, Bhanu Kapil, and Solmaz Sharif to name a few. Against that violence, poetry is aligned with contemporary battles for the restitution of land and reparations for unpaid labor to the barbaros, who live in internal and eternal exile. “The need to let suffering speak,” wrote Adorno in 1966, “is a condition of all truth.”

are assistant professors in the Department of English at Clemson University, where they co-direct the First Book Series and Radical Methods Working Group. Walt’s work has appeared in ASAP/Journal, Cultural Critique, the minnesota review, Modern Philology, symploke and elsewhere; his translation (with Lindsay Turner) of Frédéric Neyrat’s Atopies is forthcoming from Fordham University Press; his current book project is tentatively titled “Ecstatic Call: The Uses of Global Poetry.” Garry’s work has appeared in Anthurium: A Caribbean Studies Journal, the Journal of Popular Music Studies and south: a scholarly journal (formerly The Southern Literary Journal); his most recent article (with Marina Bilbija) on “Teaching Du Bois’s Black Reconstruction” is forthcoming in an edited volume on Reconstruction from the University of Virginia Press; his current book project is tentatively titled “The Black Charismatic: Demagoguery and the Politics of Affect.”