is an Italian journalist and writer. 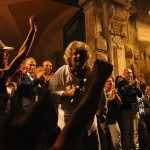 An old limit, perhaps “the” limit of the established political system, is its refusal to accept any ruptures in its rationality that may come from rising political movements. When a new political movement erupts on the scene with unexpected force, even when foreseen, the first move of the political establishment is defensive action and the attempt to assimilate and neutralize it.