is a graduate student in Literature at UC Santa Cruz and a member of UAW Local 2865. 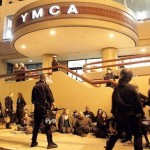 Twenty-four hours into my incarceration in Santa Rita Jail, I found myself in yet another tactical conversation, dissecting the numerous failures that had led to the kettling and mass arrests of about 400 Occupy Oakland demonstrators. This is one of the few upsides of a mass arrest. After getting the rowdy activists off the streets, the police find themselves hosting a three-day strategy conference inside the jail. Whenever a conversation begins to get stale, the guards show up and shuffle people into new discussion groups, and the debate begins afresh.