Twenty-four hours into my incarceration in Santa Rita Jail, I found myself in yet another tactical conversation, dissecting the numerous failures that had led to the kettling and mass arrests of about 400 Occupy Oakland demonstrators. This is one of the few upsides of a mass arrest. After getting the rowdy activists off the streets, the police find themselves hosting a three-day strategy conference inside the jail. Whenever a conversation begins to get stale, the guards show up and shuffle people into new discussion groups, and the debate begins afresh.

For the most part, the atmosphere in my cell was not one of defeat, but rather of rigorous self-criticism. This is a necessary moment in the growth of any movement – coming up against the limits of the premises that underlie a practice – and it seemed to be getting underway just hours after that practice had collapsed on the streets of Oakland. This was decidedly not the unreflecting group of militants that Chris Hedges has recently accused of a pathological aversion to strategic thought. 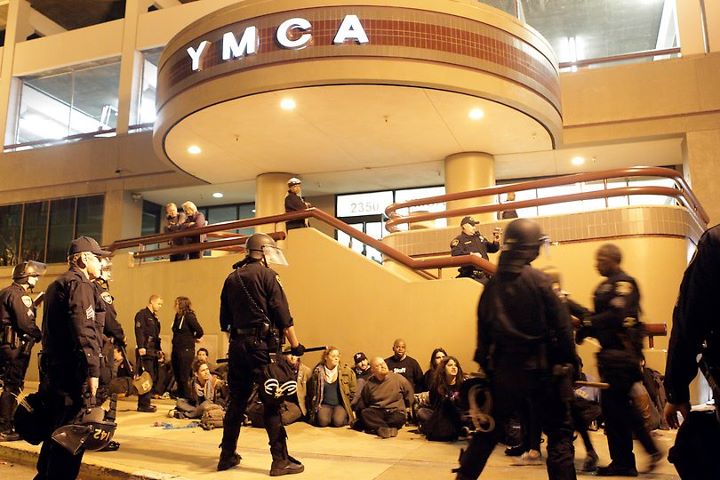 Outside of jail, the conversation seems to have been somewhat different. The focus within the movement over the past week has increasingly been on the brutality that we experienced in jail. We were denied food and necessary medication, leading to seizures; we were abused both physically and verbally; we were crammed into overcrowded and inadequately ventilated cells in which the tear gas that still clung to our clothes made breathing unbearable. All of this is true. This was a traumatic experience for many of us, and the support from cheering crowds waiting with coffee and cigarettes when we were released was powerful. This collective healing is important; it builds solidarities.

But we need to be careful. The discourse about police brutality that has been disproportionately filling the Occupy echo chamber this week is an essentially liberal one, and it tends to mask other problems that surfaced on Saturday. There is always something tautological about the complaint that one was treated badly in jail. It’s jail, after all. To focus on the brutality of the experience as though this is somehow exceptional is to misunderstand the basic function of jails and police forces in society. The violence that we came up against on Saturday is the violence that is required daily to maintain and reproduce society as it is presently constituted. What we experienced for a few nights, while awful, is simply daily life for the unpaid prison laborers who cleaned out our cells when we went home.

I know that this will not strike most of the people that were arrested on Saturday as a particularly controversial point. Many of them are no strangers to the penal system themselves. Indeed, Oakland’s radical edge within the Occupy movement largely comes from the fact that the quotidian violence that is required to reproduce capitalism is closer to the surface here than in many other communities.

But there comes a point at which these conversations can hinder further thought. I don’t want to normalize or apologize for the brutality of the system, nor do I want to lapse into a debate over what constitutes an “authentic” experience of this brutality. Nevertheless, we as a movement have to stop and ask ourselves what conversations are being displaced by this exclusive focus on police brutality. More than that, we have to look at this focus as itself a symptom of deep contradictions in our practice, which we have been unable to come to terms with.

Chief among these is the fact that up until now Occupy has experienced its growth spurts as a result of confrontations with the police. The general strike in November was in large part made possible by the excessive force with which the police evicted the campers at Oscar Grant Plaza. Similarly public instances of brutality at UC Berkeley and UC Davis led to massive mobilizations on all campuses across the UC system. The basic premise underlying Saturday’s action was in keeping with this pattern. By picking a sufficiently ambitious target and casting the action in sufficiently antagonistic rhetoric, a confrontation was with cops was assured.

Organizers were ready for this. I was ready for this. If “Move-in Day” was successful, so much the better – if not, the inevitable clash with cops would unmask the absurdity of a system that would use such force to keep an empty building from becoming a community center.

The problem is that police forces can adapt. On Saturday there was no dramatic image that crystallized the brutality of the police state, just a whole lot of the standard violence that is inherent to the nature of policing. Even the teargassing of children is, by this point, more or less normal. Whether we admit it or not, we were implicitly relying on the spectacle of police brutality to catch national attention. This didn’t happen as it did in November. And it couldn’t happen, precisely because it already happened in November.

When this narrative of victimization was not immediately forthcoming, we kicked into high gear to manufacture one. This is ultimately what underlies the focus on brutality. It’s not that anything that is being said about our experiences in Santa Rita Jail is incorrect, and of course we need to denounce police brutality wherever it exists. The National Lawyers Guild class action lawsuit should go forward, and for those who had their first material encounter with the violence of the state, the lessons learned last weekend can only have a radicalizing effect. But we also need to understand why this essentially liberal discourse about reining in police excesses has become so hegemonic amongst radicals. It points to a deeper problem within Occupy: so many of our actions are premised on producing narratives for liberal consumption. Scott Olsen was one such story. The attack on students on the “Mario Savio Steps” in Berkeley is an even clearer example. These can be useful organizing tools when they present themselves but they cannot be the basis of the actions we plan from here on out.

I don’t want to gloss over the huge advances that Occupy Oakland is continuing to make. There has been a chronic problem with building occupations in the recent past. Typically, the bulk of planning goes into the actual takeover of a building, while the question of what to do with the space once it’s occupied is an afterthought. Saturday’s action marked an advance insofar as there was clearly a tremendous amount of work that had gone into “planning for success.” A schedule of events was made, materials were gathered, and it seemed like there were the numbers to sustain an indefinite occupation. But at a more fundamental level, success was not the point. It was more or less a contingency plan for what to do in case we accidentally succeeded. The romanticized confrontation was still the unconscious premise of our actions, no matter how many people outwardly believed we would win the day.

In the holding tanks of Santa Rita, we discussed these questions. Many of us were coming to grips with the recognition that we went into Saturday thinking that there was a crew of radicals in Oakland who had it all figured out. All we had to do was show up at their event and things would go off without a hitch, which is how it had worked at the general strike and the port shutdown.

This logic broke down on Oak Street. Saturday clearly demonstrated the limits of a mode of organizing that has thus far been successful. Up until now, Occupy has involved a contradictory and unstable mixture of liberal and more radical elements held together by a thin tissue of stories of injustice and violated “rights.” This fact has led to endless unproductive disputes about the role of “violence” in our movement, of which Chris Hedges is just the most recent and banal example. The problem is that if our unity can be reduced to our shared victimization, we are reliant on police and civic officials to continually give us these stories. As police tactics adapt, and as the demands we make of the system become more radical, this will become increasingly difficult. The basis of the connections we make within the movement must involve a deeper sort of radicalization. The central antagonism is not between the police state and the people, but between labor and capital. The anti-police repression marches that are now happening weekly in Oakland, while focused on a crucial issue, tend to sideline this larger point. To the extent that this discourse dominates our practice, we are operating with exactly the same limited and moralizing conception of our movement’s unity as our liberal critics. The romanticized picture of the brutal repression of peaceful demonstrators that Hedges fetishizes is on a continuum with the images of victimization in many of our own actions. We need to tell a new story.

After we experienced the material limits of this type of organizing, some very necessary conversations began in Santa Rita in earnest. The focus on the brutality has its uses, but to the extent that it stands in as a substitute for this more substantial self-criticism, it allows the tenuous alliance between adventurism and humanitarian liberalism to persist. While we are all justifiably angry at the Oakland Police Department and the Alameda County Sheriffs, what comes out of this experience needs to be more than simply a strengthened conviction that we hate the cops. If we don’t swiftly move towards the self-criticism that we need, the opportunity will be missed.

Jeb Purucker is a graduate student in Literature at UC Santa Cruz and a member of UAW Local 2865.

is a graduate student in Literature at UC Santa Cruz and a member of UAW Local 2865.