is a writer and activist. 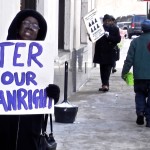 In the last decade, especially after the 2008 financial crisis, the urban centers of the Midwest such as Chicago and Detroit, but also in the Northeast, such as Baltimore and Philadelphia, have developed a new dynamic: the use of the state (in the form of local or regional governments) to transfer infrastructural resources and their control out of or away from marginalized urban populations, which are predominantly black, brown, and immigrant.