was a communist organizer, a member of the Citizens' Committee to Aid Packing-House Workers, and Director of Organization of The Council of African Affairs, Inc. 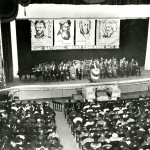 Over the whole land, Negro women meet this triple exploitation – as workers, as women, and as Negroes. About 85 per cent of all Negro women workers are domestics, two-thirds of the two million domestic workers in the United States. In smaller numbers they are found in other forms of personal service. Other employment open to them is confined mainly to laundries and the tobacco factories of Virginia and the Carolinas, where working conditions are deplorable.