It was a rough week that seemed to crystalize all my misgivings about the city I’ve lived in for two years: its misrecognition of policy for politics, the complacency of its well-compensated federal workers, the barrier of segregation between its professional class and its residents. As other occupations gradually formed their local characters, Occupy DC, its downtown location remote from the neighborhoods of long-time residents, looked like it was getting sucked into the vortex of merely symbolic protest. I wondered if this was the final unraveling and co-optation of our little piece of the movement. Without a galvanizing radical action, DC looked ready to dissipate under its own contradictions.

Fortunately, an action was already underway. The target was the Franklin School, an enormous brick Victorian building, a spot of warmth and color among K Street’s imposing, faceless cubes of metal and glass – a bit of humanism breaking up the riot-cop aesthetic of late capitalist bureaucracy. The Franklin School hadn’t been a school for some time. Declared a historic place and refurbished in the 1990s, it had nevertheless been closed down for years, its breathtaking interior walled off from the public behind boarded-up windows. In 2002, newly formed housing advocacy group MAYDAY DC occupied the building as part of a successful campaign to turn the building into an emergency shelter for the homeless. In 2008, capital reclaimed the space by fiat: then-mayor Adrian Fenty (whose plans for improving the city inevitably relied on privatization and gentrification) went against the wishes of city council, evicted the tenants, and sold the building to a condo developer for a song. The subsequent winter, a former tenant died on the streets from hypothermia. The building has remained derelict ever since its sale.

The action was announced by a few tweets: Occupy DC was now occupying the Franklin School. All my reservations about the occupation were immediately shoved aside. Everything I thought was good strategy for the occupations – taking over buildings, working with community activists, calling attention to the ravages of gentrification (widely assumed to be an unalloyed positive in the District), engaging in actual civil disobedience instead of just protest – had suddenly, unexpectedly come into play. A few minutes later: an announcement of police converging on the building. I hopped on my bike and made a beeline to the school. 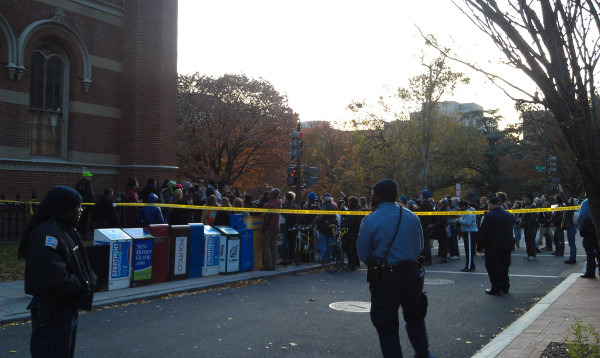 I arrived to a raucous protest of about 70 people on the corner of 13th and K. An impressive black banner had been dropped from the roof of the building, about 40 feet up. Inside, occupiers in colorful hoodies and bandana masks waved and raised fists. Across 13th street, in Franklin Park, someone was blasting hip-hop with freestyles over top – I could only make out some of the words, but “Occupy DC” was clearly among them. Cops had already started blocking off the streets and enclosing areas with police tape, standing around looking bored. Someone said the cops were going to wait us out, that we should get food and water to the building. It turned out to be unnecessary. As the sun set, a mic check went up – the cops are coming in! The occupiers inside shouted that they would block police entry with their bodies. It was the last I heard from them for the rest of the night. Flashlights danced around the walled-in courtyard amid sharp cracking sounds – the door being smashed in.

What followed were the slightly confused efforts of the rest of the protest to support the occupiers inside. An alley ran east-west alongside the school from 12th to 13th street, already roped off by cops. The police would have to take the occupiers out the alley, so the plan was to block it. The group split into three – one group at each side of the alley, and a central rally point at the corner of 13th and K. A few people hopped on top of the wall, grabbing an iron fence, to keep tabs on what was going on inside the building. While the numbers of people had doubled since when I first arrived, communication between the three groups was difficult. We have phones and cameras and Twitter and iPads, but when an action ramps up, everyone is too in-the-moment to use them. You become present in your surroundings, the cocoon of swirling digitalia in which so many of us navigate urban spaces suddenly becomes a distraction, an impediment, obscuring places instead of making them intelligible. I went to the alley entrance on 12th. “Lock arms, boy-girl-boy-girl,” someone shouted. There was some uncertainty as to why we would do this, but people did it.  “We don’t have resources for everyone to go to jail,” I overheard someone say. A cop stepped harmlessly through the seated people to snickers from skeptical occupiers. Another cop who identified himself as “Officer Ron Paul” called one of the action committee leaders over. “We are going to pull a van through one way or another, so you do what you have to do and we’ll do what we have to do.” It wasn’t clear if that was a “hard way or easy way” threat. The action committee leader suggested that each person call a “trusted person” to say there was a possibility of arrest. To kill time, people started to say why they occupied; I went to check the other end of the alley. A boy of about 10 rode up on an oversized cruiser bike. “I bet they got in through the back door there. You can get in if you jimmy it with a knife.” This kid is clearly an asset to the movement, I thought. The traffic along K crawled as people gawked at the spectacle. A man in a white van – working – rolled down his window and asked what was going on. I explained the action to re-open the shelter. “Sounds like a great idea, I hope it happens.”

The other end of the alley was a similar situation: about 30 people sitting, treating their confusion and uncertainty with bemusement and the occasional chant. DC’s occupation is not Oakland’s – we are inexperienced in dealing tactically with cops, we are still fumbling at how to coordinate groups of people efficiently. Our activists come largely from NGOs and human rights organizations and non-profits, not the street. The situation was uncertain, but not tense. The DC police weren’t in riot gear. They ambled about, looking bored. We mirrored their actions. Everyone waited as more people showed up on each side – cops with sirens and lights, protestors on bikes. Police and protestors chatted idly across yellow tape.

The occasional chant went up, including “We are Yoshi Onokata,” the homeless man who died in the cold after the Franklin School was closed. In spite of the intended solidarity with the plight of the homeless, something bothered me about young college-educated people claiming this man’s struggle as their own, so I didn’t chant along. I can’t claim to be victimized in the same way as Yoshi Onokata. The paddy wagons on 12th swung around to the entrance of the alley on 13th. The cops had taped off a section of the street with about 20 alley blockers inside. Cops started dragging limp protestors from the building to the vans, masks and hoods removed, arms and legs in cuffs. The crowd cheered. Passersby stopped and asked what was going on. A boy on top of his dad’s shoulders asked what was going on. “There are protestors in the building.” “What are those?” A middle-aged couple with grocery bags slowed down. The woman started filming with her phone – “Oh, someone is getting in trouble,” she mused. Her husband, looking considerably more somber, said nothing.

“Block the vans!” someone shouted. But no one moved. Our numbers – maybe 150 at the most – couldn’t realistically shut down the whole street, even if all of us had been willing to be arrested. We are only beginning to build the boldness that comes from concrete experiences of solidarity, the confidence that comes from numbers, the inspiration that grows from displays of bravery and sacrifice from your comrades. The first van took off with three occupiers inside, protestors banging on the sides as it pulled away. As the second van started to move, someone threw himself in front of it and was knocked to the ground. Police and protestors swarmed around. I heard he was hurt, but no ambulance came – he must have been spirited away in the back of a cop car. The cops pushed people back – the only real contact between the crowd and the police – and the last two vans sped off. Police tape was ripped down, and people milled about on 13th Street. Cops started pulling up stakes and leaving. 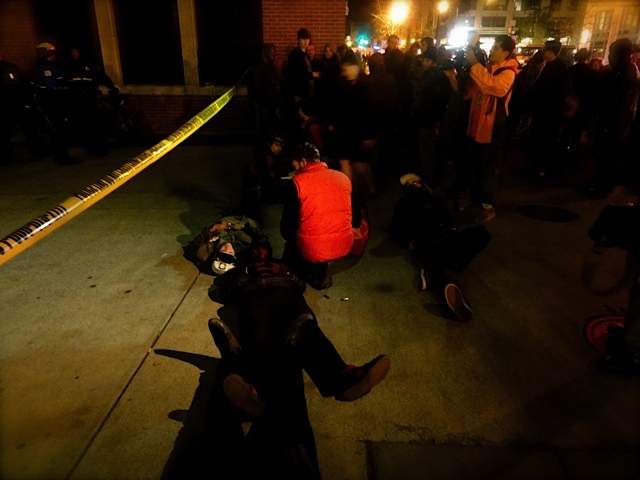 A mic check went up. “We are going to go back to McPherson Square for a GA.” The crowd seemed reluctant to go. People grouped into hushed cliques. I noticed that most actions have had this character: someone shouts out an action, there is hesitancy as everyone gauges whether or not to do it and if other people are going to, and then, maybe, some people act. Or they don’t. It took several mic checks to gather the crowd and get them to go back to McPherson for a general assembly. Some people started chanting “We’ll be back!” – a personal favorite of mine. “We’re already here!” someone cracked. He had a point. We were here, full of energy, in larger numbers than I’ve seen at a GA. Bystanders were talking about the action with occupiers, expressing enthusiastic support. Reporters were conducting interviews. Trudging to the camp for a long meeting didn’t appeal to me. I biked back down K Street, towards home. Cop cars, cabs, and even a stretch limousine buzzed past me. Just a few blocks east of the Franklin School, it was like entering another world, one unscathed by what had just happened. For now, at least.

A meeting on Monday between housing advocates and occupiers was informative, if a bit rudderless. It’s not clear to anyone how best to incorporate civic groups into the Occupy movement. A lot of time was spent giving personal stories, envisioning alternative approaches to public space, voicing utopian visions of how these buildings could be repurposed. These are all well and good. But what should be emphasized is the way the Franklin House was turned into a shelter the first time, which aligns perfectly with existing tactical abilities of Occupy DC. After MAYDAY DC’s occupiers were removed from the building, the group harried Mayor Anthony Williams, repeatedly breaking up his campaign fundraisers with raucous protests until he relented and turned over the Franklin School to the activists.

Gavin Mueller is a graduate student in cultural studies at George Mason University. He lives in Washington DC.