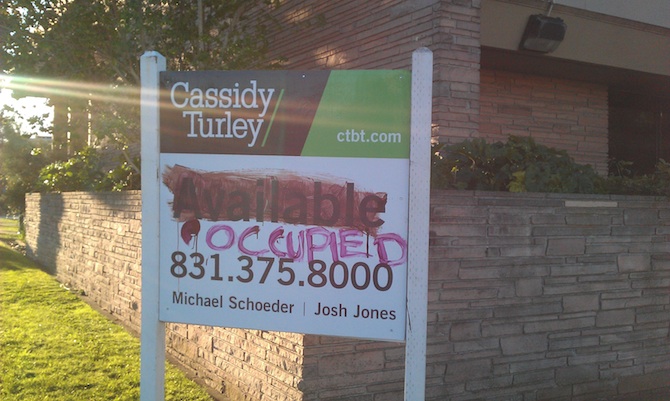 We had heard murmurings all week about a new autonomous action emerging from the Santa Cruz occupation. The conditions of social life in Santa Cruz involve a visible homeless population, and they have not been absent at Occupy Santa Cruz, which stationed itself outside of the courthouse, right across from the county jail and a bail bondsman. It’s easy for the media to dismiss occupations as a collection of bums, but the truth is that the homeless need a place to sleep; and now, with chilly nights and fierce winds, the activists at the occupation, like the homeless every year, need more than tents.

A general assembly was announced at 2PM at the courthouse. We arrived and were relieved to discover that there would be no GA. Instead, after people gathered, we marched to Chase Bank. A few basic statements about foreclosures, and the hardworking DJ wheeled in the speakers and played the new anthem of Santa Cruz actions.

The march spread to the road, and walked across the bridge. There was no fanfare as the members of the affinity group that organized this action filed quickly into the abandoned Coast Commercial Bank at 75 River Street. The building had been vacant for three years after being being purchased by Wells Fargo.

Immediately the extremely well-organized facilitators of this action coordinated deliveries by vans full of furniture and supplies, which were quickly brought inside the new social center. They issued a statement explaining their project:

An existing time-honored U.S. and California law allows for the transfer of a property title when a property is occupied and taken care of by an alternative party for an extended period of time. This law is called adverse possession. The law was born out of the belief that society’s best interests are met when land and property are utilized productively rather than sitting vacant. Today, the building at 75 River St. has been adversely possessed. No longer will the property exist only as an empty parking lot and a vacant building with a sign re-directing people to Wells Fargo across the street. It will be repurposed and used to benefit the community instead of Cassidy Turley, the large-scale commercial real estate company currently leasing the building, and Wells Fargo bank.

Instead of an empty space, there will be a space for community teach-ins, an open library, and discussion forums. The space will be offered to Occupy Santa Cruz as an opportunity to have a roof over its head and allow for more organization to take place. The space will be safe, non-violent, non-destructive and welcoming. The building will be a forum for individuals in the community to learn from one another, and help the Occupy movement grow.

Police showed up before long. They may have arrived before getting the call from Wells Fargo, but either way the bank made it clear that they wanted the occupiers out. The police liaison monitored them adeptly, and a banner drop was quickly pulled together. The banner bizarrely read “OOcupy Everything,” which at least had the virtue of entertaining supporters outside. I have since been informed that this was in solidarity with Occupy Oakland, whose hashtag is usually #OO, but perhaps realizing that this was an esoteric reference the banner committee revised the text with a splash of gold paint. 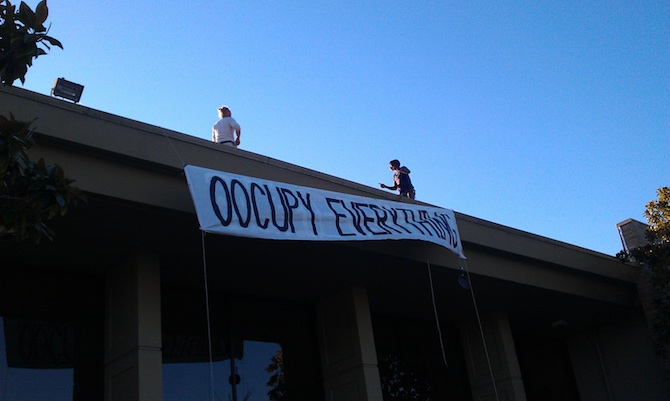 When a small group of five or six officers advanced on the building, occupiers linked arms to defend the entrance, while others waited at the side with cameras ready. The police fell back. They stood watching for quite a while; we spoke with some of them and determined that they were simply confused, with no plan in place for responding to this kind of action. 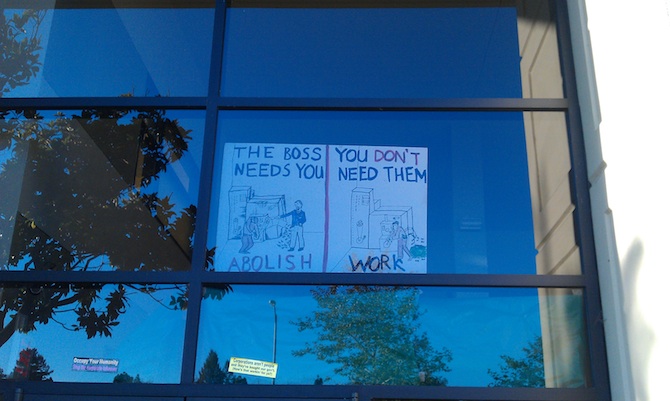 I went inside to observe the GA taking place. It had already been clearly announced that the space should be respected – there was no vandalism, but the windows had been decorated with informational signs. The GA was discussing the two inevitable questions: first, what should we do when the police make a raid; second, what should we do until then? As the meeting continued, some of us who had been there for several hours left to reproduce our labor-power. I fell asleep. When I woke up this morning the news was incredible.

“I have my own army in the NYPD,” Michael Bloomberg has said, “which is the seventh biggest army in the world.” Fortunately the Santa Cruz Police Department is not so big. Last night, the Occupy movement was bigger. Riot police attempted to take the entrance, but barricades were erected and the police were surrounded. They had to ask for permission to leave. “Hopefully this group isn’t representative of a new aggressive movement,” the spokesman for the SCPD told Mercury News.

Whether their hope is fulfilled is up to us. I walked to the site this morning and found a heavily barricaded building filled with sleeping militants. Two sleeping bags outside the entrance contained people who were prepared to be the first to deal with the repressive state apparatus. A reporter interviewed a calm and collected media liaison.

It’s hard to exaggerate the significance of forcing the police to retreat. Smaller locations often seem cut off from the major actions that take place in New York or Oakland. But these are locations with unique conjunctures and unique possibilities. A wave of occupations in small towns can form a very strong link with big-city port shutdowns.

Even if such occupations are repressed by state violence, this is not a defeat. The occupations movement is cycling geographically. If it leaves one place, it goes everywhere and comes back. Just Monday, November 28, UC-Santa Cruz students carried out an action in solidarity with UC-Davis’s strike against the administration’s practice of police brutality. They formed a picket line outside the Hahn “Student Services” Building – the building containing the offices that facilitate student debt, charge outrageous rents, and discipline students who exercise their right to protest. They had three demands: the immediate resignation of Chancellor Katehi, police off campus, and no fee hikes. This action made it clear that police brutality is not simply a civil liberties issue: it has to be understood as an instrument used by the administration to enforce the exploitation of students and to prevent resistance to this exploitation.

The union representing workers in Hahn determined that its members should not cross the picket line. They were sent home, with pay. As we gathered outside Hahn we received news from Davis. Hearing of our successful picket, they had decided to respond. About 200 students endorsed our demands in their GA and occupied Dutton Hall, their equivalent of Hahn.

When we heard of their action it was difficult to avoid the subject in our own GA – especially since it had been clear since the morning that someone (a sympathetic worker?) had left a window open at Hahn. After some debate we moved inside. A very long GA took place, but the building was held for a night. The next day another GA decided that the ideal step would be to count this as a major advance, but to allow other students to file their paperwork as we build and develop the movement; a comprehensive list of demands was generated, with the promise of future actions. The demands represent nothing like liberal reformism; they represent a very focused antagonism towards the administration, a clear message that we will not permit them to carry out their business. 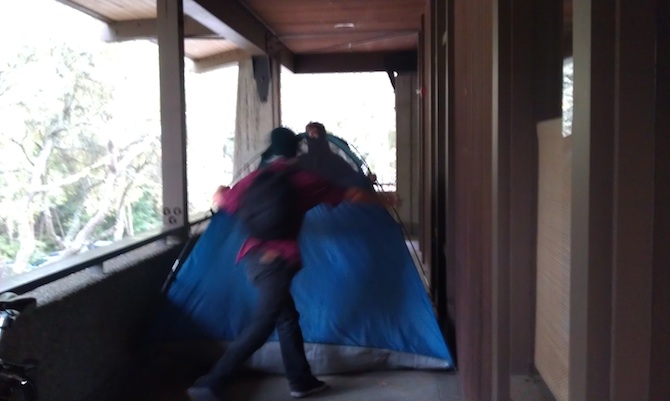 Even though the occupation decided voluntarily to leave, its achievement was dramatic and profound. It demonstrated that there is a geographic cycle of escalation, a solidarity that spreads as actions ebb and flow in different places. In the Hahn-Dutton cycle this meant a movement within the University of California system, but the action yesterday demonstrated that the building occupation tactic is powerful outside of university activism. This connection between student radicals and the community is another element of the cycle. That the Occupy movement’s next step will involve moving inside has become more and more clear; but just as crucial are that our numbers grow dramatically, and that we spread everywhere.

This morning a comrade stood on the roof of the new occupation looking out for police, who he had seen hovering around the encampment at City Hall. He doubted that they would make a scene in daylight. “Downtown business is too important.”

But every indication is that they will return at night, in greater number and with more instruments of violence. They will return to literally do the bidding of Wells Fargo, draining public funds to pay for repression, adding to the $13 million spent in other cities. If we don’t have the strength to respond, our best option will be to retreat. Let’s not enter into that situation. If you’re anywhere near Santa Cruz, come to the 75 River Street social center so we can outnumber the police again and defend this building. If you’re far away, no problem. Occupy a building near you. 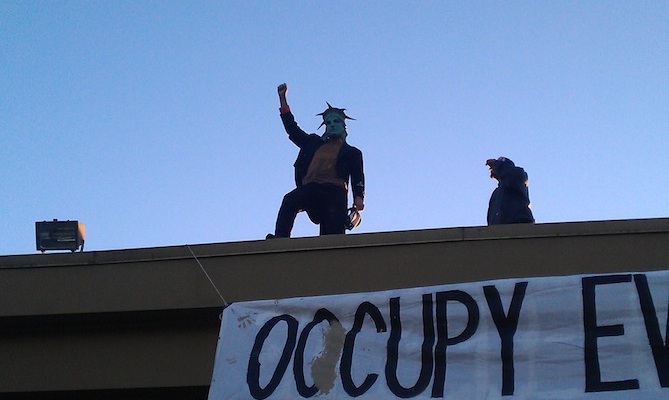 Asad Haider is a graduate student at UC-Santa Cruz, a member of UAW 2865, and an editor of Viewpoint.