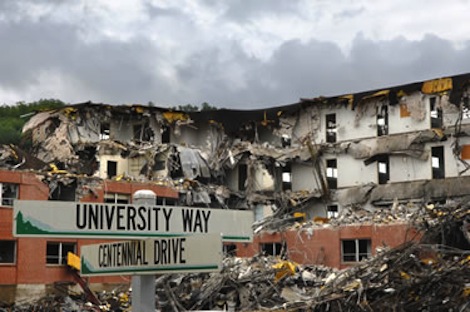 We’re living in a revolutionary situation. We could reformulate the classical definition in the following terms: the ruling elites of global capital cannot live as in the past; the workers, the precarious, the students, the poor, the living knowledge refuse to live as in the past. In the global crisis, the transnational struggles – from the North Africa insurrections to the acampadas in Spain or Syntagma Square, from the Chilean university movement to Occupy and the Québec uprising – are composed by the convergence of a downgrading middle class and a proletariat whose poverty is directly proportional to its productivity.

1. The crisis of the traditional idea of knowledge, which is also the crisis of the leftist mythology of knowledge as a neutral and natural common good to defend from the commodification. In contemporary capitalism, knowledge – a central source and means of production – is not only a commodity, it is a central commodity in capitalist accumulation. In fact, there is no neutrality or naturalness of knowledge: it is always a matter of production, and within capitalist social relations it is a source of exploitation too.

When we speak of living knowledge, we are trying to identify the new composition of living labor, and the socialization of knowledge production. This is an ambivalent process: knowledge is what is produced in common by living labor, and also what capital exploits; it is the possibility of the autonomy of social cooperation, and it is what capital captures and valorizes. In this ambivalent process, knowledge becomes a central battlefield: the common doesn’t exist in nature, but has to be produced.

2. The crisis of disciplines, that is, of the modern organization of knowledge. In the spring of 2009, answering a question posed by the Queen of England, a group of mainstream economists concluded that the discipline of economics had not only been unable to foresee the incipient crisis, but that it was also absolutely unable to understand anything about the economy, and could be held responsible for the crisis itself. The discourse within other disciplines has not been much different: they are increasingly unable to explain what is occurring. The disciplines, as well as the rhetoric of interdisciplinarity, represent less and less a form of organization of knowledge, and more and more an artificial measure of the production of living knowledge – in other words, a tool of exploitation. In the current struggles what is at stake is a new and autonomous organization of the knowledge, based on its common production.

3. The crisis of the traditional figure of the student. Since they are producers of knowledge, students are no longer a workforce in apprenticeship, but are immediately workers, and precarious workers. In fact, there is a continuous overlapping between the education market and the labor market (think of “lifelong learning” or the accreditation system). It’s not by coincidence that the issues of labor (precariousness, devaluation of the workforce, impoverishment, crisis, etc.) have been central in student and university struggles in the past few years. And for this reason, the university struggles have a potentiality of political generalization across the whole class composition.

4. The crisis of the modern dialectic between public and private. Let’s consider the corporatization of the university. It doesn’t mean only the entrance of the private funds into public institutions. In the American and Anglo-Saxon models, the definition of corporate universities doesn’t depend so much on their juridical status: they are both public and private, and funded by both state and corporate money. “Corporate university” means that the university itself has to become a corporation – to work on the calculus of cost-benefits, budget rationality, and cuts in workforce costs, to compete in the global education market. It means a university beyond the dialectic between public and private, state and market. From the point of view of struggles, this means that we have nothing to defend: what is at stake is a constituent process of a new university. We call it the university of the common.

5. The crisis of the university as an elevator for the social mobility. Precariousness and indebtedness – as permanent life conditions – have demolished the idea that you go to the university to have a position higher than your background. All in all, this means an irreversible crash of capitalist progressive promises, even in their individualist competitive forms.

In the dismantling of welfare – exemplified by the crazy tuition increases in Québec – debt becomes a perverse way to access social needs (housing, education, healthcare, mobility, etc.). We can speak of a financialization of the university and of life. The system of debt works as a process of canalization of your choices, a disciplinary regime imposed not only on your present but first and foremost as a mortgage on your future. It is a moral regime of individualization: if you are in debt, you are in guilt. But exactly for these reasons, we have to oppose the moralist judgments from the Left about access to the credit system, because the use of credit also highlights the incompressibility of the social needs. The Occupy Student Debt Campaign, and its claim of a sort of collective right to bankruptcy for students, workers, poor, and precarious people, is strategic: on one hand, to re-appropriate the social wealth that we produce in common; on the other hand, to refuse the moral regime of financial capital and its apparatuses of individualization, and to create a collective process. In fact, we can say that the struggle over credit-debt in contemporary capitalism is the equivalent of the struggle over the wage in industrial capitalism.

On these bases, let’s conclude with a couple of the political questions raised by the transnational movements. On one hand, how can we build up a politics of common composition between the downgrading middle class and the proletarians with “no future,” these two elements which are put in common by impoverishment and capitalist expropriation, but are segmented by the apparatuses of financial capitalism (debt, individualization, salary stratification, identity politics, etc.)? This is a central node for the organization of the common.

On the other hand, nowadays the battlefield is not situated in the defense of the public (because it is a privatized public), but in a constituent process beyond the system of political representation. The occupation of the squares, the university, and metropolitan space is not a protest, there are no demands to address to the government. This practice indicates the immediate creation of a new space and time, an embryonic form of organization of the life in common. The question is: how can we build up a collective organization of our autonomous cooperation, and destroy the mechanism of capitalist capture? How can we transform the university into an institution of the common?

If we’re living in a revolutionary situation, we also know that it will not lead in a mechanical movement to the revolution itself, and the “1%” will not fall down if we do not throw them out. This is our task.

is a militant in the Hobo collective, is part of the editorial board of Commonware, and is an autonomous researcher. Among his various books and essays, he is author of The Production of Living Knowledge (Temple University Press, 2011), Futuro anteriore and Gli operaisti (DeriveApprodi, 2002 and 2005), Elogio della militanza and Il treno contro la Storia (DeriveApprodi, 2016 and 2017). This interview makes up the appendix to his most recent book, L’operaismo politico italiano: Genealogia, storia, metodo (DeriveApprodi, 2019).