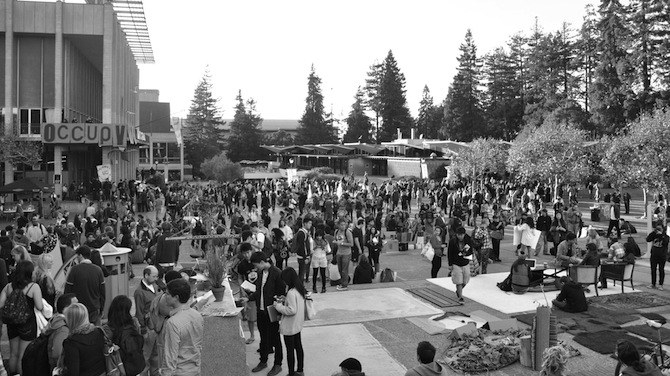 It’s hard to know whether this is simply a period of incubation, from which another, similar wave of class struggle will soon emerge, or if this moment of relative inactivity is allowing for the recomposition of our forces, our alliances, the ways we take action together. If the terrain of struggle we now encounter has been remade by the past year of action – by our effective acts of opposition, by new forms of state repression and co-optation, and by our own missteps – how can we most effectively intervene in the shifting political force fields we’re coming to inhabit?

As we offer ourselves a bit of relief from the intensities of the past year – as we heal, maintain ties, and work through it all – it’s worth collaboratively thinking through these questions. Struggles against austerity in California, which I’ve participated in and tried to think critically about, can provide a concrete context for this kind of reflection.

While many of us have been taking a rest, politicians have been active as ever. The recently passed California state budget is, as in previous years, crushing. It shortens the amount of time people can remain in the workfare program, reduces the program’s work exemptions for people with young children, cuts payments for and limits access to childcare, reduces funding for in-home supportive services, and guts public health care programs. In combination, these cuts constitute a severe attack on working-class women, and therefore on the class as a whole. The undoing of welfare, childcare, and in-home service programs further privatizes and devalues caring labor, and thus imposes increasingly impossible burdens of domestic and waged work on all those, particularly women of color, who have been denied financial reserves.

Austerity is still the order of the day. For all the class struggle that’s been staged in the streets, plazas, and universities this past year, and despite what we’ve accomplished, those who govern and manage capital are still effectively making it harder for working people to survive. And no partial, uncertain victories in the educational sector should allow us to lose sight of this stark reality.

There are a number of ways to make sense of the effects this year’s state budget will have on students and campus workers. The basic story is that, rather than simply cutting once again the budgets of schools and universities, the state has made these cuts contingent upon the potential failure of the compromise tax initiative this November. If the initiative passes, we’ll have a tuition freeze in the Universities of California, and a year without significant cuts in other sectors of public education.

That we may have another year without undergraduate fee hikes in the UCs, and without cuts to schools and colleges, should be understood as an effect of recent rounds of uncompromising student protest, including the cascading strikes and encampments that shook California’s universities last fall. These protests demonstrated to the state and to the UC Regents that further fee increases would come with a cost, and helped build support for the original Millionaires’ Tax, of which the current tax initiative – formed out of a compromise between the governor and the president of the California Federation of Teachers – is a pale copy.

While we might be inclined to consider the possibility of a year without cuts to public education as a victory, albeit an uncertain one, there are other political dynamics shaping the current situation that make for a murkier picture. Governor Jerry Brown, in tying the fate of students to his tax initiative, is working to co-opt and neutralize student movements – movements that otherwise could further delegitimate state institutions enacting and enforcing austerity, and even potentially set off, as in Quebec, a period of generalized social unrest. This fall, it will be incredibly difficult for those active on campuses to resist pressures to put our energies into campaigning for the tax initiative, despite the fact that relatively little of the revenue would go to education (much is slated to “pay down the deficit”); that the initiative includes a temporary, regressive sales tax; and that electoral campaigns force us to engage on a terrain and in a mode of struggle that work to our disadvantage, in comparison to campus-based direct action and mass organizing. As we recently saw in Wisconsin, social movements that allow themselves to be entirely diverted into electoral politics risk massive demoralization, defeat in both electoral and non-electoral domains, and the fraying of bonds forged through collective struggle.

Still, the pressure to participate in the initiative campaign will be intense, since the effects of a defeat would be so severe. In addition to the cuts that would be triggered, the initiative’s defeat would make educational privatization appear all the more inevitable, allowing those pushing fee hikes and pension reductions to invoke the “will of the voters” in support of their efforts. The UC Regents, for instance, are rumored to already be considering a 20% fee hike (approximately $2,500/year), which they’d try to implement in the event that the tax initiative failed. And the initiative very well could fail, especially if, for instance, the European debt crisis intensifies, and the economic depression in the States subsequently deepens.

While we have little control over broader economic dynamics, we can still prevent our movements from being co-opted and neutralized by the governor. We could, for instance, explicitly reject the electoral process as a primary terrain of struggle; along the lines of the movement of the Indignados in Spain, we could organize a series of walkouts and occupations in October tied together by the slogan: “There’s no vote against austerity.” Alternatively, we could prioritize local struggles whose outcomes will not directly be affected by the fate of the tax initiative. At UC Berkeley, for instance, the administration is attempting to move up to six hundred staff members to a building located miles away from campus – a move explicitly designed to spur workers to resign rather than endure degraded and isolating conditions of employment. In solidarity with workers organizing against their displacement, we could hold disruptive actions at the building to which they would be relocated. We could also link up with the movement to defend City College of San Francisco, which appears to be taking shape in response to the threat of dis-accreditation and closure levied by a recent audit – an audit performed by a body with ties to educational privatizers and for-profit colleges. Given how imbricated the various sectors of public education are in California, all students have a stake in the fight at CCSF, which has the potential to generalize struggles against tuition hikes and course reductions.

Even if student movements successfully avoid getting directly caught up in electoral campaigning, it’s conceivable that their more rebellious edges might be worn off by the specter of the November election. There’s a danger that students might be haunted by the imagined judgment of “the voting public,” that we might take on this phantom as a kind of superego, avoiding actions that could upset a projected voter or make them less sympathetic to the cause of public education. And there’s plenty of reason to think that voters in California are inclined to be unsympathetic: in recent decades, they’ve passed a number of reactionary propositions, including 13, 209, 8 and 36.  While Governor Brown may be confident that voters’ presumed classification of students as members of the “deserving” middle class will ensure passage of this year’s tax initiative, student activists ultimately have little to gain from attempting to fill the role of respectable defenders of existing educational institutions.

While higher education has historically been understood, with some validity, as a marker and reproducer of middle class status, college is no longer a guaranteed ticket to a stable, decent paying job. Increasingly, it offers to the degree-holder little more than decades of indebtedness and precarious employment. Our generation of students is facing a process of proletarianization; and rather than clinging to a fantastical “middle class” status, definitively refuted by economic transformations, we should act in solidarity with, and with an eye towards, the working class from which many of us hail and into which we’re headed. As we plan another round of protest, let’s concern ourselves with the perception of the broader class, those facing another devastating round of austerity, rather than with the sanctimonious vision of those who fear and resent the pleasures and possibilities of working class struggle and mutual aid – pleasures that many of us experienced last fall at the Occupy Oakland encampment, and during strikes on our campuses.

While things have been slow this summer, we’re still here; and if the recent past is any indication, another upsurge is likely imminent.  As we attempt to determine the shape coming struggles will take, the experience of the past year can give us confidence that direct actions, coupled with mass organizing, have the potential to generate widespread participation, open up new centers of gravity, and offer us lives less consumed with the anxieties of debt, work, and uncertain futures.

is an assistant professor of History at the University of Michigan and a member of the Michigan Society of Fellows. She has published on struggles in the sphere of social reproduction for LIES, Reclamations, and the South Atlantic Quarterly, and is currently working on a book project about anti-colonial and class struggles on the British and colonial Indian railways between the 1840s and 1920s.