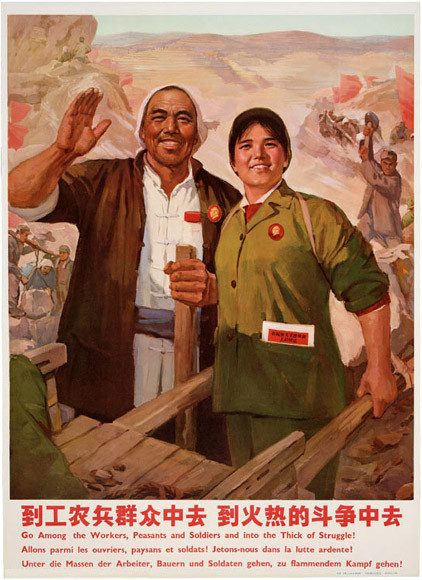 An important movement has been set in motion in the UJC 2: Marxist-Leninist militants have formed établissement groups and are going among the popular masses, to live in their midst and to work in production.

The principal task we are currently faced with is developing and strengthening this movement, unifying its orientation, its style of work, its organization.

To do this, we need above all to correctly grasp the political tasks of this movement, tasks stemming from the concrete reality of the class struggle in France. Students and Marxist-Leninist militants who are not workers have entered the factories in an organized way.

What are they going to do there?

What is their goal?

What are the limits of their work?

In what way does this constitute a step necessary for the development of the Marxist-Leninist movement in France, for the building of the Communist Party?

In other words, the établissement groups movement is a concrete answer we are offering today in France to the universal problem posed, here as elsewhere, by the birth of a political vanguard of the proletariat: the problem of the fusion of revolutionary Marxism and the workers’ movement.

The most advanced revolutionary ideas and theories first take hold, on a large scale, among students and young intellectuals.

This is a law of historical development that is being verified in France like everywhere else. But the students and young intellectuals cannot be the leading force of the revolution, even when some of them link up with the masses and transform their own point of view.

Only the working class is powerful and vigorous enough to take the fate of the revolution into its hands.

It is incumbent therefore upon young revolutionary intellectuals to play the role of intermediaries, in order to make these vanguard ideas take hold among the working class, especially among the most combative elements of the proletariat, who must constitute the driving force of the revolution.

We will see later on why it is currently necessary, in order to carry out this task, that young intellectuals enter into production.

What are, in France at the present moment, these advanced revolutionary ideas that first took hold more or less widely among students and young intellectuals?

They are the ideas of the mass line, of the strategy and tactics of popular war, of the development in stages of the uninterrupted revolutionary process, of the communist ideology of “Serving the People” and of going to the school of the masses, the style of work that entails self-criticism and submitting to the criticism of the masses…

In short, the thought of Mao Zedong, which has been spread once again, and been understood in a much more profound way, by the Great Proletarian Cultural Revolution.

If the proletarian vanguard assimilates this ideology and this practice, if it unites itself still more closely than it could spontaneously with the working masses and the people, if it masters the essence of the revolutionary strategy and tactics of the proletariat, then the revolution will witness a new vigor in France.

But what do we understand by “proletarian vanguard”?

How is it that there is still what we might call a “divorce” between the vanguard of the workers’ movement on the one hand, and the vanguard ideas of the proletariat (the thought of Mao) on the other?

And, above all, how to bring about a fusion of the two?

These are the workers who, by their solid class position, the correctness of their tactics in the struggles against their employers, and by their spontaneous application of the mass line have gained the confidence of their comrades at work and have come forward as the leading elements of the mass movements in the factory.

These workers are the cadre that the masses have given themselves, and they make up the de facto vanguard of the workers’ movement; in strikes, demonstrations, in all worker struggles, their role is decisive.

At the present moment, for us, to recognize the leading role of the proletariat in the revolution means working effectively in order to give rise to advanced worker nuclei armed with the thought of Mao Zedong who will lead the movement…

Conducting work at the heart of the masses in a given place without concentrating one’s efforts on the creation of a leading Marxist-Leninist worker nucleus is in reality to deny the leading role of the proletariat in the revolution.

Insofar as such a nucleus does not exist, no progress is possible in mass work.

What are tasks for the établissement groups that stem from this general orientation?

First, it is necessary that each établissement group rapidly put on its work agenda the training of a small nucleus of advanced workers won over to Marxism-Leninism, the spreading of the thought of Mao, the explanation of our political line, the study of our publications, the elaboration of Marxist-Leninist tactics in the workers’ movement.

The goal of the établissement groups should be to quickly transform themselves into communist work groups in which workers play a leading role.

As for the worker nuclei, it is best that they form small, clandestine union factions that will be able to apply a mass line in various firms and show workers through practice the correct path of the class struggle, all while progressively unmasking the revisionists.

Our tactic is to form clandestine Marxist-Leninist nuclei among the advanced workers, those most active in the organization of struggles and union work.

This means that we reject as erroneous a certain number of lines that deviate from this tactic:

1. The left opportunist line, which would consist in our rushing (ourselves, once we have entered production, or with a handful of Marxist-Leninist workers) into open Marxist-Leninist propaganda within the working class; to engage in such an action before having accumulated sufficient forces, before having concretely demonstrated to the masses the correct line of work by systematizing its own ideas and its own aspirations, before having concretely unmasked the handful of leading revisionists, would doubtless be to cut ourselves off from the masses, to divide the union and to forbid ourselves all means of action in the struggle against management.

2. The “right” opportunist line, which would amount to carrying out by ourselves, without completely associating our work and tactics with a worker nucleus, even a very small one, a “snail’s pace mass line,” that is, in making limited elements of political consciousness slowly take hold, bit by bit, among the worker mass.

How does what we have discussed affect organizational forms?

It would mean that the “établissement groups” form (students and M-L militants going to establish themselves and entering production) is a provisional one: the établissement groups should transform themselves as quickly as possible (some months) into Communist Work Groups at the site of production, in which the workers won over to M-L, the union leaders and militants, the older experienced militants or the young workers active in struggles, the creation of a Union, etc, play a leading role.

We should then have as our short-term goal the uniting of these worker nuclei into a single organization, the organization of Communist Work Groups, developing unified tactics in the workers’ movement and unified propaganda among the masses, effectively controlling the content of our publications, etc.

In order to promote the transformation of the point of view of our established comrades and the birth of genuine organizations implanted among the masses, we must undertake precise measures:

1. We must free comrades up from the ideological and organizational problems posed within the UJCml.

It is not good for these comrades to divert important forces towards carrying out a direct ideological struggle (meetings, debates, etc.) within the organization.

As for the direction of the whole of the movement, this question can be resolved in a definitive way only when the organization of Marxist-Leninist workers’ groups is set up. In the period of transition we are currently in, the leading role of the établissement groups’ line should concretize itself essentially through direct participation and control over the press, the internal bulletin and all propaganda instruments, the active elaboration of the general line of the movements and its political texts;

2. Organize the meetings of the établissement groups in a proletarian style: brief and concrete discussions, carefully planned and leading to practical measures and texts.

Second Part: The movement in favor of établissement within the UJCml

The propaganda within the UJCml in favor of établissement should be pursued.

But it is indispensable to put an end to the petit-bourgeois excess that marked the first period.

We must resolutely liquidate ideological terrorism and sectarianism.

1. Établissement among the masses and the entry into production are political tasks that some of our comrades should take up in the current stage of the Marxist-Leninist movement’s development. Comrades who “settle down” have precise political objectives:

a. to spread the thought of Mao among the working class;

b. to create Marxist-Leninist worker nuclei, effectively leading the class struggles in the units of production;

c. to place themselves in the service of these nuclei in order to define, in common with them, the tactics of  Marxist-Leninists in the workers’ movement, basing themselves on the principles of the mass line;

d. to build, under the leadership of these advanced worker nuclei, a communist thought, which is the decisive instrument for general propaganda among the working class.

Studying our internal press and publications, discussion with workers, reflection on union questions, militancy and the work of propaganda in the youth movement and in neighborhoods can constitute, for these comrades, instruments of this preparation.

2. The petit-bourgeois line of ideological terrorism on the themes of self-revolutionization should be criticized, combated and defeated.

We should explain that it is not up to some militants in our midst to “transform” and “revolutionize” their comrades through closed-door discussions, baptized “ideological struggle.” It is through political work, political education, and prolonged struggle at the heart of the masses that our comrades will be able to transform their point of view profoundly, learn to correctly serve the people, and to make revolution.

With regard to the criticism of our class position, of our conception of the world, nothing can replace the oversight exercised by the masses themselves.

For the time being, the weapon of militants in the ideological struggle within the organization is political discussion, backed up by facts, in the light of Marxism-Leninism and the thought of Mao.

With regard to methods within the établissement movement, we should PUT POLITICS IN COMMAND, avoid squandered energy and haphazard efforts, and arrive at the greatest effectiveness possible in carrying out our tasks.

was a French Maoist organization founded in 1966.