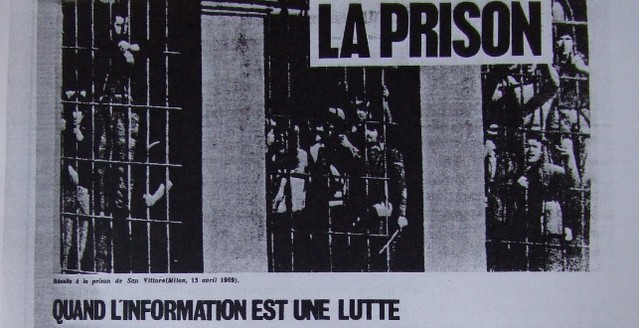 Although the explosive events of May 68 in France radicalized entire sectors of society, many radicals paradoxically passed the world of the prison over in silence. As an internal circular from the Gauche prolétarienne (GP), a revolutionary formation inspired by Maoism, put it, “concern for the prisoners does not exist,” and many act as if “an imprisoned militant is a dead militant.” But the mounting wave of repression following the May events eventually pushed activists to reconsider the prison as an eminently political space. In June 1968, Minister of the Interior Raymond Marcellin banned eleven radical organizations. He then proceeded to tighten censorship laws, harass radical publishers, and even pass a law that held that anyone associated with any demonstration in which persons were harmed, property damaged, or violence committed against police officers could be arrested for those crimes, no matter how tenuous the link. The prisons flooded with radical militants from all currents.

In response, radical gauchistes – especially those from the now illegal GP – began to organize in the prisons. Yet at first, the Maoists tended to draw a firm line between themselves, the “political prisoners,” and all the other “common law prisoners.” As Michel Foucault explained in a later interview:

But when their first actions were crushed in isolation, they realized the need to link up with other prisoners, which in turn dramatically transformed their understanding of the working class itself.

Collaborating with these other prisoners taught them that the very distinction between “political prisoners” and “common law prisoners” was itself a political division created by the ruling class. As Alberto Toscano puts it, unity now meant breaking a division that “was both imposed upon and eventually affirmed by the workers’ movement, with its debilitating introjection of a bourgeois morality itself reproduced by legal and penal institutions: the division between the proletariat and the ‘non-proletarianized plebs.’”

This sparked a comprehensive rethinking of the composition of the working class. In fact, contrary to the GP’s previous beliefs, the working class turned out to be far more complex than assumed. How did the law create divisions within the working class? How was the prison a site of class struggle? What did the prison regime have to say about state repression in general? What was the prison’s relationship to the capitalist mode of production? To power?

These were open questions, which demanded political investigation. Indeed, few people knew anything about the prisons, especially since in France outsiders were not allowed inside – the first time Foucault stepped into a prison was in Attica. A basic understanding of conditions inside these spaces, then, was deemed strategically essential. With this goal in mind, those involved in the ex-GP’s political organization for prisoners, such as Jacques Rancière, Daniel Defert (Foucault’s partner), Christine Martineau, and others, settled on the idea of inquiry, explicitly recalling Karl Marx’s “workers’ inquiry” first proposed in 1880.

The ex-GP activists were strongly encouraged in this direction by a number of radical intellectuals who soon joined the campaign. After its earlier failures in the prisons, the ex-GP realized that it had to connect the struggle inside the prisons with those on the outside. Thus, in December 1970, ex-GP radicals advanced a new position: they decided to reach out to philosophical and cultural luminaries, such as Michel Foucault, Gilles Deleuze, Jean Genet, and Pierre Vidal-Naquet. This encounter between the ex-GP on the one hand, and a number of militant intellectuals, above all Foucault, on the other, gave way to a new organization, the Groupe d’information sur les prisons (GIP). 2

On February 8, 1971, forty-five years ago, Foucault unveiled the GIP to the public. Co-signed by Pierre Vidal-Naquet and Jean-Marie Domenach, the manifesto outlined a program of inquiry, research, and political struggle. Working with prisoners, their families, doctors, lawyers, and militants, the GIP successfully smuggled texts in and out of the prisons, ultimately producing five investigative booklets. But this campaign not only gathered vital information about the prisons, it helped give voice to all those prisoners forcibly silenced by the state, playing an important role in the emergence of a vibrant, autonomous prisoners’ movement in France as well as other countries.

We reproduce Foucault’s statement, newly translated by Stuart Elden, below.

None of us is sure to escape prison. Today less than ever. Police control [quadrillage] over day-to-day life is tightening: in city streets and roads; over foreigners and young people; it is once more an offense to express opinions; anti-drug measures increase arbitrarily. 3 We are kept under “close observation.” 4 They tell us that the system of justice is overwhelmed. We can see that. But what if it is the police that have overwhelmed it? They tell us that prisons are over-populated. But what if it was the population that was being over-imprisoned? Little information is published on prisons. It is one of the hidden regions of our social system, one of the dark zones of our life. We have the right to know; we want to know. This is why, with magistrates, lawyers, journalists, doctors, psychologists, we have formed a Groupe d’Information sur les Prisons.

We propose to make known what the prison is: who goes there, how and why they go there, what happens there, and what the life of the prisoners is, and that, equally, of the surveillance personnel; what the buildings, the food, and hygiene are like; how the internal regulations, medical control, and the workshops function; how one gets out and what it is to be, in our society, one of those who came out.

This information is not in the official reports that we have found. We will ask those who, for some reason, have an experience of the prison or a relation to it. We ask them to contact us and tell us what they know. A questionnaire has been compiled which can be requested from us. As soon as we have sufficient responses, the results will be published.

It is not for us to suggest reform. We merely wish to know the reality. And to make it known almost immediately, almost overnight, because time is short. This is to inform opinion and to keep it informed. We will try to use all means of information: daily newspapers, weeklies, monthlies. We therefore appeal to all possible platforms.

Finally, it is good to know what threatens us, but knowledge is also good to defend oneself.  One of our first tasks will be to publish a small Manuel du parfait arrêté (Complete Arrest Guide), paired of course as an Avis aux arrêteurs (Note for Arrestors).

All those who want to inform us, be informed or participate in the work can write to the GIP at 285, rue de Vaugirard, Paris-XVe. 5

This text was first read at a news conference on February 8, 1971. It was subsequently published in Esprit in March 1971. Partial translations can be found in Didier Eribon’s biography, Michel Foucault, trans. Betsy Wing (London: Faber and Faber, 1992), 224-5; and in David Macey, The Lives of Michel Foucault (London: Random House, 1993), 258.

was the author of The Order of Things and The History of Sexuality.