My friends and I realized that Penn State kids would not be taking this well. Joe Paterno may have been a minor national celebrity, but he was Premier of State College, with soviet realist propaganda dedicated to him all over town—including a bronze statue. The trustees had announced the beloved figurehead’s dismissal at a time when many students were already drunk, a decision interim President Rodney Erickson would have trouble defending in days to come. Even though Penn State kids become completely different people every four years, they always seem to be more likely to riot than your average college students. 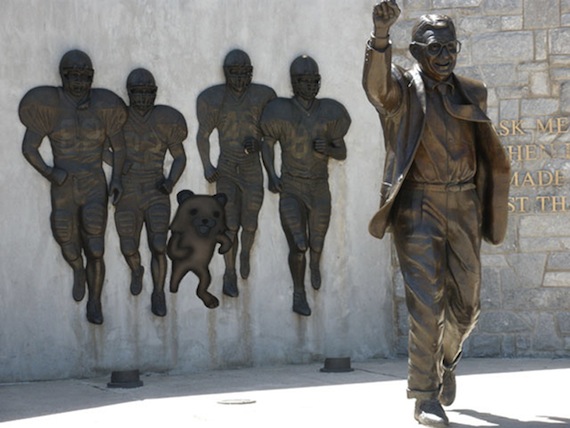 I don’t know whether sports are always what Noam Chomsky has called “training in irrational jingoism,” but that night I became convinced that in State College, they are little more than that. In his landmark study of ideology, Louis Althusser pointed out that “the role of sport in chauvinism is of the first importance.” But it isn’t only the sense of assumed regional loyalties and resentment for foreign enemies that sports instill in participants and spectators alike. Althusser elaborates:

The imaginary relations represented by sports are highly efficient training for life under capitalism. Players are workers, their bodies instruments of labor, applying a Protestant work ethic to an apparent competitive meritocracy. In the case of college sports, as a damning article in The Atlantic recently addressed, the surplus value extracted from their labor is at a maximum: collegiate athletes are not financially compensated for their many hours of work. Meanwhile, the oligarchic structure of the industry produces symbolic wealth for the administrative ruling class in the form of wins, not to mention actual profit for the university itself. To be sure, players enjoy their brief moments of glory. But there are no statues of football players in State College.

Paterno’s dismissal threw Penn State into ideological crisis, as we saw that night after climbing the stairs outside. Sure enough, the streets were flooded with young people dressed in blue and white. It was unclear at this point where they were headed. Some carried signs defending Paterno. Some cheered. Others followed with indignant resolve. Others followed just to follow, giddy with the thrill of being part of the crowd.

Nerds like us often play a dangerous game in situations like this, the point of which is to find a guy bigger than you and insult him as much as possible without letting him realize he’s being insulted. Bonus points if he realizes he’s being insulted but you talk him out of beating you up. You lose if he beats you up. I’ve never lost.

We played this game for much of the night. To the ubiquitous call-and-response chant, “We are?” “Penn State!” we answered “Pedophiles!” We informed couples that someday their own children would ask them why they defended a child molester. Some we just asked why they were there. We never got much of an answer. When I shouted after one kid that his actions were an endorsement of child rape, he looked as though he was seriously considering turning around and taking the time to kick my ass. But after regarding me with contempt for a moment, he dismissed me with logical reasoning: “You’re not even American,” he scoffed, and walked on.

He had a point. What he meant, though, was not quite the same as what he said. What he meant was, “you’re not even white,” and he was right. I’m not white at all. In fact, at that moment I was probably the only nonwhite person on the whole block. But when it comes to being American, my credentials are impeccable: I was born and raised in State College, PA.

“There’s only one good use for a small town,” goes a song by Lou Reed. “You hate it, and you know you’ll have to leave.” I hated State College. Many accounts of the Sandusky affair by current and former residents would have you believe that this scandal is a fall from grace. There was once a consensus, they say: we loved Penn State, and we loved football. Most of all, we loved Uncle Joe and his Blue and White Army.

I didn’t. To me and the kids I hung out with, Penn State football didn’t mean “success with honor,” as Paterno’s now-infamous slogan would have it. It didn’t mean we were part of a community, or a tradition. What Penn State football meant was that in State College, there were no all-ages concerts, no cinemas that screened foreign films, no radio stations with anything but Top 40 hits or classic rock. Like many little college towns, State College is infused with a submissive parochialism that finds its starkest expression in team spirit.

The submission to the ruling ideology Althusser identified in the structure of spectator sports has been the defining characteristic of the ugly state of affairs at Penn State. The story begins, at least in legal terms, with graduate student Mike McQueary allegedly discovering Sandusky raping a 10-year-old boy, after he heard a “rhythmic slapping sound” emanating from the locker room showers. McQueary has had trouble keeping his story straight since then, but his Grand Jury testimony is incriminating. He made eye contact with both Sandusky and his victim, but he didn’t stop the rape, and he didn’t call the cops. He told Uncle Joe.

The most disturbing thing about McQueary’s passivity is not the conduct of one man, but that his ideological conditioning to walk away from an atrocity may not be so unique. Former NFL fullback Jon Ritchie, who was mentored by Sandusky early in his career, speculated on ESPN with disarming honesty on how he would react to the scene Mike McQueary said he saw:

It’s no surprise; American sports replicate the corruption characteristic of the ruling classes, and leave its witnesses powerless. The Chicago Tribune points out that Penn State is not an isolated incident, citing reports of sex crimes by coaches of youth football teams in Texas, Rhode Island, Nebraska, Illinois, and Virginia—all episodes from this year alone. Even legal proceedings surrounding the Penn State case appear to be little more than an invocation of blind faith in the ideological underpinnings of American sports culture. “He’s a jock,” Sandusky’s lawyer told CNN, as though that explains everything. “The bottom line is jocks do that—they kid around, they horse around.” And they get away with it.

This sick sense of entitlement is inevitable anywhere these sorts of hierarchies flourish. Pier Paolo Pasolini’s notorious film Salò, based on the Marquis de Sade’s novel 120 Days of Sodom, explores these libidinal dimensions of political power. A group of Italian fascists in the last days of Mussolini’s regime kidnap and torture 18 teenagers, enacting their basest sexual fantasies. International imperialism is not enough; they crave an imperialist expansion into flesh. Pasolini shows soldiers and house staff looking on indifferently, something like Europe’s complacent bystanders to the rise of fascism. Something like the administrative officials at Penn State University, who let Sandusky live out his own days of Sodom.

We may never know the full extent of Paterno’s involvement in covering up Sandusky’s bad habit, but he is unquestionably implicated. Former Penn State assistant coach Mike Paknis has no patience for Paterno’s denials. “Joe knows everything,” he told NBC Sports, claiming that Paterno abetted Sandusky from the beginning. This allegation is consistent with Paterno’s longstanding tendency to manipulate the university system to his advantage. The Wall Street Journal has reported that in 2007, after six Penn State football players assaulted students in an off-campus incident, the university’s Vice President of Student Affairs called for an application of the same disciplinary standards that would apply to any other students, instead of the customary brushing-under-the-rug Penn State football players enjoyed. Paterno used his financial clout to force her to resign.

Why, then, did students take to the streets to oppose the toppling of a dictator? Their outrage was blind, and it was barbaric. The Nation’s sports correspondent, Dave Zirin, summarized the antics of the kids I saw in downtown State College that night:

Students overturned a media truck, hit an ESPN reporter in the head with a rock and made every effort at arson, attempting to set aflame the very heart of their campus. They raised their fists in defense of a man fired for allegedly covering up the actions of a revered assistant who doubled as a serial child rapist. The almost entirely male student mob was given the space by police to seethe and destroy without restraint.

That same day, Zirin pointed out, students at Berkeley were peacefully protesting as part of the national Occupy movement. Cops beat them brutally with riot sticks. If Penn State students won’t join the national protest against the economic corruption plaguing their country—a circumstance that leads to relentless tuition increases for them and their families—can’t they at least protest against the corruption at their own university that allows a violent pedophile easy access to victims? Apparently not. Thousands of students rallied in support of his sponsor.

There was some dissent. The next day, students and community members held a candlelight vigil in honor of the victims, a valuable act that is nonetheless no replacement for holding the powerful accountable. Those attending the following Saturday’s game organized what they called a “Blue-Out.” In contrast to the usual “White-Out,” in which fans show their solidarity at Penn State’s Beaver Stadium by dressing in white, the Blue-Out called for game-goers to wear blue, a color that is associated with promoting awareness of child abuse. Blue and white, of course, are coincidentally Penn State’s team colors. The result was an almost comical display, with the stadium’s seats full of spectators wearing the same old Penn State shirts. Nothing really changed.

For the first time in my life, I watched a football game. I was glued to the television, hoping Penn State would lose. I was against my home team not out of any resentment for the players or the fans. I feared that a win would incite a triumphalist fervor in the misguided kids who rioted before, and they would destroy our town.

We lost. Of course we lost. It was the first game Penn State played without Coach Paterno on the sidelines since Dylan went electric. Uncle Joe still holds the record for winning more games than any collegiate football coach, a record he broke a week before the Sandusky allegations surfaced. But that isn’t going to be his legacy. At best, Joe Paterno is guilty of doing too little in the face of evil. It’s difficult not to conclude that the students, the administration, and the local community have been guilty of the same. I’ve waited my whole life for this town to snap out of it.