Legend has it that the campus of the University of California, Santa Cruz was designed by a prison architect who, in response to student riots at UC Berkeley, created a campus grid without a central point. Lacking a major quad or lawn, demonstrations would be dispersed to the individual colleges, defused and controlled. While this legend is certainly not true – UCSC was conceived of as an experiment in “human-scale” education whose existence was to challenge the dehumanizing size of state universities – the layout of UCSC does present this challenge to student activists.

For student activists, this never presented a formidable challenge. The steep and often breathtaking geography, combined with only two main entry points, make campus closures an attractive alternative to the large rally.

With the near certainty of more fee increases and budget cuts looming, between 400-500 UCSC students woke several hours before dawn last Thursday to shut campus down for the second time in two years. Greeted by sparkling stars and bagels, the day started off well. Reports from one of the main entrances circulated around 5:30 or so that someone had tried to run his car through a group of students, only to be removed from his car and ticketed by a nearby police officer. By 8 AM, as rain soaked our clothes, UCSC administration let it be known that the campus was effectively closed and that students should not be held responsible for missing class. Police cars, which had earlier been speeding around the campus, were told by their superiors that this activity was unacceptable. A man who had attempted, just after 8 AM, to drive his red Mustang through the crowd was taken away by police, and another man, intent on instigating a fight, got a small taste of student fists. There would be no Oakland Police Department thuggery today.

On the whole, it was a far cry from March 4, 2010, when a few drivers attempted to force their way onto campus, breaking a student’s leg, under what appeared to be the approving eye of campus police. The administration then had also claimed that students were wielding “clubs and knives” and were a clear menace. We are, it appears, under a kinder and more sympathetic administration these days.

For their part, student organizers were also clearly far better prepared this time – UCSC students could offer masters classes in organizing. Publicity for the closure was everywhere on campus; outreach had generated so much enthusiasm that the first fifteen people I met at 4:25 AM were freshmen taking part in their first political activity; coordination between checkpoints was smooth; organizers had procured a flatbed truck to use as a stage/DJ station. And, crucially, a temporary Tent University had been organized to allow students to facilitate and attend workshops on a variety of topics – from the environment, to the prison system, to modern forms of racism, and more – that affect our lives in overt and oblique ways. This was not just a protest against the rising cost of university attendance and narrowing of educational opportunities, but a call for new educational forms. 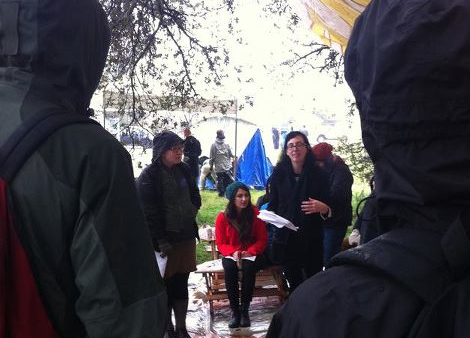 While the obstruction has received the bulk of media attention following our shutdown, the Tent University and student zines should be receiving the bulk of critical attention. It is here that the mismatch between the compulsion to attend college, the expectations of students, and the broader economic crisis intersect. It is here that the skills required for organizing meet spiraling student debt, increased class sizes, and reductions in student services. It is here that our analysis confronts formal education and the ideology of the “public good.” It is here that the slogans, “Make Banks Pay” and “it’s a crisis of priorities,” and their corresponding responses, “tax the bankers/oil companies” and “re-fund education,” reveal the limits of reform: demonstrating that the public good under capitalism is built on systematic exclusion, that the vast swelling of the middle class in the post-war era was based on an expansive economy that could return rates of profit large enough to spread to the working class, a scale of expansion that is simply no longer possible. The emphasis shifts from the reform of the university to a widespread transformation of the organization of society – a new analysis, refreshingly rough and tinged with the experience of crisis.

Since UCSC’s inception, higher education has become a social and economic necessity. The “human-scale” university that UCSC was meant to inaugurate, however, has defaulted on many of its “radical innovations,” which were already attempts to turn back the clock to an earlier phase of college education: grades are standard, academic departments are powerful, class sizes are large, and the cost is multiplying. The inability of UCSC to reinvigorate earlier forms of education should show us that changes in the socio-economic structure of the US preclude going back to earlier times. If campus shutdowns illustrate a university in crisis, the repeated attempts by UCSC students to seek alternative forms of education, refusing to demand a return to the golden years, is the real story.

has written for Reclamations Journal, and is a member of University Research Group Experiment (URGE). He is also a graduate student at UC Santa Cruz.