This is the last of a series of articles debating Salar Mohandesi’s “The Actuality of Revolution: Reflections on Lenin’s State and Revolution.” Also see the earlier responses by Todd Chretien and Malcolm Harris, as well as Mohandesi’s final response. 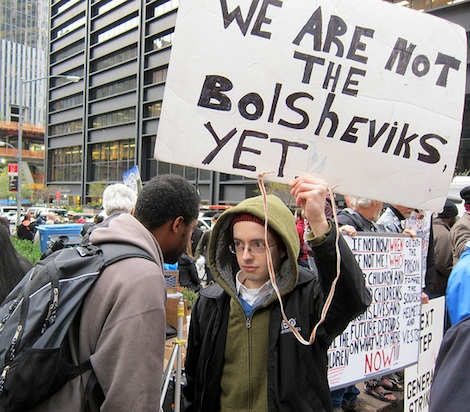 Mohandesi’s picture of a vacillating, conservative, confused Lenin straining to hold together a divided Bolshevik leadership caught off guard by the mature revolutionary upsurge by St. Petersburg’s workers and soldiers during what came to be known as “the July Days” in 1917 is inconsistent with the historical record. Based on his sketch, Mohandesi concludes that Lenin had to catch up theoretically with where the masses were moving practically by “articulating” the “actuality of revolution,” that is, making explicit what was implicit in the angry mass protests that nearly toppled the Provisional Government. Both he and Chretien lead us to believe that Lenin’s book, State and Revolution, and the Bolshevik-led insurrection that overthrew the Provisional Government were the results of Lenin’s reconsideration of the Marxist theory of the state.

Mohandesi argues that the enduring relevance of Lenin for activists today is not his words or deeds but the method underlying them, his theorizing and articulating of the actualities created by the rebellious masses. This echoes neatly Viewpoint Magazine’s “About Us” mission statement.

There are three components of this debate: (1) the history of the July Days; (2) the immediate context in which State and Revolution was produced (Lenin was hiding underground after the July Days when he wrote it); and (3) whether Lenin’s role was primarily that of an articulator or theorist. Harris’s piece is a welcome reality check that avoids the main pitfall of historical debates: pedantry.

A detailed, line-for-line dissection of Mohandesi’s historical account would require a lengthy essay and a necessarily narrow focus that would not be useful for discussing (2) and (3). Instead, I will confine myself to this observation: if Mohandesi’s account is accurate, it would contradict first-hand accounts written by July Days participants such as Fyodor Raskolnikov (Kronstadt and Petrograd) and Nikolai Sukhanov (The Russian Revolution, 1917), Alexander Rabinowitch’s detailed study The Bolsheviks Come to Power, and Lenin’s writings and speeches in which he shifts on the possibility of a peaceful transfer of power at least three times throughout 1917. Those who are interested in figuring out the rights and wrongs of (1) should read the aforementioned books.

Lenin’s shifts – open to a peaceful transfer of power before the July Days, for an insurrection after the July Days, back to the possibility of a peaceful power transfer in the aftermath of the Kornilov coup’s defeat, and finally to a Bolshevik-led insurrection as the Bolsheviks gained majorities in workers’ and soldiers’ councils (soviets) throughout Russia in fall of 1917 – did not reflect vacillation or lack of theoretical clarity on Lenin’s part and certainly had nothing to do with the writing of State and Revolution. As Lenin wrote shortly after completing the introduction to State of Revolution,

Now, and only now, perhaps during only a few days or a week or two, such a government could be set up and consolidated in a perfectly peaceful way. In all probability it could secure the peaceful advance of the whole Russian revolution, and provide exceptionally good chances for great strides in the world movement towards peace and the victory of socialism.1

Lenin did not believe the class nature of the Provisional Government changed after the Kornilov coup’s defeat when he discussed the prospect of a peaceful transfer of power to the soviets with their Menshevik and Socialist Revolutionary (SR) majorities. Lenin’s seeming flip-flops on insurrection were tactical shifts in a strategy aimed at making the soviets the sole government power that came in response to a rapidly changing situation which produced original and transient political and class alignments. Lenin’s shifts on the question of insurrection also prove that he did not believe that the Mensheviks and SRs were doomed in advance to play a counter-revolutionary role.

In other words, Lenin was careful but not pedantic.

No one who reads State and Revolution would guess based on the text that the author might countenance the possibility of a peaceful transfer of power to the soviets. The notion that the book reflects the “summing up” of the experiences of the 1917 Russian revolution fails to account for the fact that Lenin never completed the chapters dealing with the Russian experience. State and Revolution is best understood as a general guide to the Marxist approach to the state rather than a guide useful for practical on-the-ground policy (try to smash the capitalist state machine with your fist at a demonstration and you’ll understand what I mean).

Lenin felt that State and Revolution was necessary to set the record straight on Marxism and the state (the original title of the manuscript) since the distortions perpetuated by the Second International became commonly accepted as Marx’s and Engels’ actual positions by socialists and anarchists alike. Lenin himself accepted these distortions and only through his 1916 debate with Nikolai Bukharin did he uncover and reject them.

The odd thing is that Mohandesi tells us that “we must try to read Lenin the way Lenin read Marx” and yet, a few pages prior, claims that Lenin “distort[ed] Marx and Engels almost as much as Bernstein or Kautsky.” Should we distort Marx, Engels, or Lenin? Is there any value in distorting anyone, even if their name is Eduard Bernstein or Karl Kautsky? My answer is definitive: no. Revolutionaries cannot strawman, misrepresent, or distort our way to a post-capitalist order. If we could, we would have done it by now because these tactics have become commonplace in the socialist movement’s debates.

The notion that Lenin articulated at the level of theory the “actuality of revolution” and made explicit what was implicit in the struggles of the day smacks of the division between mental and manual labor, between philosophy and action, between theory and practice, between intellectuals and workers, between thinking and doing. The masses fight, Lenin thinks and devises the program they must get with (as in, “get with the program”). This is probably not what Mohandesi meant, but it is the logical implication of his heavy emphasis on Lenin the theorist/articulator in the conclusion of his essay.

Harris’s response to the question “is Lenin still relevant?” and the July Days debate is refreshingly honest – he does not know much or care to know about Lenin or Russian history, given the vastly different era we are living in. He contrasts Occupy’s horizontal, self-organized nature (“spontaneity, ambition, self-organization, quick always-on communication, working in teams”) to that of the Russia’s revolutionary workers and says, “Of course the revolutionary workers went to look for Lenin at the crucial moment – but would we?”

This false dichotomy probably stems from a combination of understandable ignorance2 about the Russian revolution in 1917 (the soviets were profoundly horizontal and far more democratic and inclusive than our General Assemblies), and a misunderstanding of what a vanguard party is.

As I argued in “Lenin and Occupy,” Occupy functioned in practice like the “Leninist” vision of a vanguard party in two respects: (1) it brought mass numbers of people onto the field of battle, into the process of self-organization, and (2) it fought all forms of oppression and exploitation.3

The third element that Occupy and a vanguard party have in common that I neglected to discuss in “Lenin and Occupy” is the role of cadres: seasoned, experienced, battle-tested political organizers were central both to the success of the Bolsheviks (people like Raskolnikov) and Occupy Wall Street (people like Harris). Of course I am not putting an equal sign between Raskolnikov and Harris; Raskolnikov’s writing is far easier to follow than Harris’s, and leading tens of thousands of heavily armed sailors to smash a state is not the same as setting up an encampment that initiates an uprising of sorts. However, there is an undeniable underlying similarity if we understand the term cadre broadly rather than narrowly. Every organization and struggle has cadres, whether we are referring to the Industrial Workers of the World, the CNT in Spain, the Black Panther Party for Self-Defense, the Nation of Islam, or the Syrian revolution.

Occupy’s claim to be leaderless is both true and false; it is true in the sense that there is no central committee controlling it and false in the sense that everyone in Occupy is a leader. Far from being leaderless, Occupy is leader-full – full of new ideas, initiatives, forms of organization, and collaborative projects,4 some daring, others prosaic, all initiated by occupiers themselves without direction from above or anyone’s permission (meaning autonomously).

Since the beginning of Occupy Wall Street, the Marxist left has continually bemoaned the prevalence of anarchist ideas and methods within Occupy while completely failing to provide a better, more credible, and popular alternative, as Harris correctly points out. Instead of seizing on the progressive elements in Occupy’s small-A anarchism and the tremendous freedom of action5 that came with it to help Occupy organically outgrow the restrictive and Byzantine modified consensus process, precious resources have been wasted writing polemics for a tiny audience conflating6 utopian communes, prefigurationism, and the (sound) strategic arguments against creating a list of demands, falsely7 accusing fellow radicals of being anti-union, and attacking8 Occupy’s un-Marxist vision of a general strike in a way reminiscent of the old Marxist dictum: “general strike is general nonsense.“9

Given this, is it any wonder the Harrises of Occupy look askance at us as we continually debate the excellent ideas of ancient Russian white men and tout the achievements of revolutions our grandparents are too young to remember, while revolutionaries today are being killed in the streets Homs and being brutalized by police in the streets of New York?

Rather than asking “is Lenin still relevant?” we ought to focus on making him relevant by showing everyone in practice that the people inspired by his ideas are better, more creative, more effective occupiers. Once we earn some credibility on that front people might begin to listen to what we have to say on the big questions – reform, revolution, what to do with (or rather to) the Democratic Party, running in elections – but not before. 1917 is rich with lessons, the main one being how a mass socialist party can smash a state that protects capital, but we have yet to learn how to become a mass force, a force to be reckoned with on the local, state, and national levels, a force more popular than the Obamas and the Romneys we are up against.

Occupy should be a learning experience for us all concerning these tasks, but as Lenin wrote in State and Revolution, “there are none so deaf as those who will not hear.“10

Pham Binh has published articles in the Occupied Wall Street Journal and thenorthstar.info, the first national collaborative blog by and for occupiers.

2. I am referring to the fact that no one outside a tiny segment of the left studies the 1917 Russian revolution in any great detail, so ignorance of the July Days and the revolution generally is understandable.

7. A documented overview of the charges and debate can be found at the Black Orchid Collective.

9. Generalstreik ist generalunsinn was a common saying among socialists in debates with anarchists over the general strike in the late 1800s and early 1900s.

Pham Binh has published articles in the Occupied Wall Street Journal and The North Star.