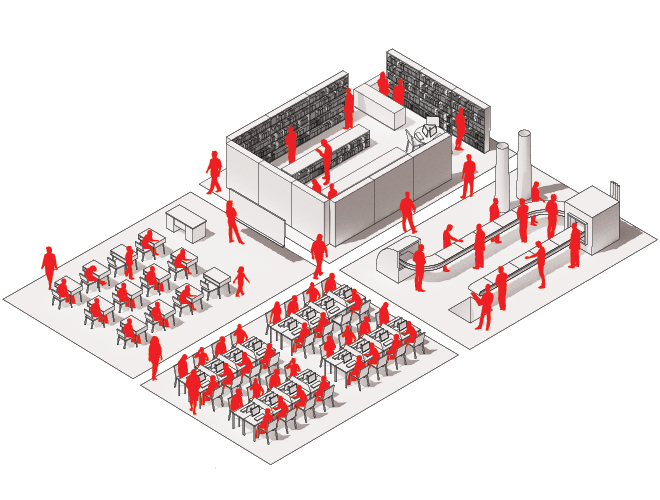 THE AMERICAN WORKER IN TRANSNATIONAL CIRCULATION

The American Worker and the Forze Nuove: Turin and Detroit at the Twilight of Fordism | Nicola Pizzolato

In a 1982 paper presented at MIT, Italian urbanist Paolo Ceccarelli characterized Detroit and Turin as “città fragili” – fragile cities. His assessment contrasted starkly with the way the two “motor cities” had been represented for most of the twentieth century, but it resonated with his contemporary audience.

We present here an unprecedented document of great value about the lives of American workers. This appraisal stems not only from the fact that it definitively puts paid to both the absurd claim that American workers don’t have class consciousness, and the myth of the comfort and luxury of the American proletariat.

There exists an America that no one talks about, which is to be found beyond the myth of the refrigerator, the automobile, and the television, and beyond the myth of affluence for all. It is the America of the factory: an unknown America whose history is made of strikes, exploitation, and proletarian misery.

The proletariat is the real response to this economic pseudo-materialism. Its response is elaborated through its practical existence. Anyone who looks at its history can see that the proletariat has not merely reacted to definite, external economic factors (degree of exploitation, standard of living, mode of concentration), but that it has really acted.

The schema that ordered Socialisme ou Barbarie’s conception of revolution relied upon the close examination of working-class experience. This put the group in little-explored territory.

This text opens a discussion on the problem of the workers’ journal, which will be carried on in the following issues of Socialisme ou Barbarie. It draws on the experience of Tribune Ouvrière, published for over a year by a group of workers from Regie Renault, from which we have published extracts in the preceding issue of this Review, and from which one will find new extracts in the current one.

THE DISCOVERY OF CLASS COMPOSITION

The personal, political and intellectual itinerary of Romano Alquati was inextricably bound up with Italian postwar history, when a generation of militants relegated the importance of their own profession to second place, seeking instead jobs that could support their political commitment. In doing so, they created a new way of “being-political” that would prove to be a watershed for successive generations, up to the present day.

At the end of his 1975 introduction to his seminal 1964 Classe Operaia article, “Struggle at FIAT,” Romano Alquati concludes his reflection with a compressed glance back toward one of the impasses that faced him and the other “classical” workerists as they tried to articulate the early days of what would become two decades of social war, from the 1960 magliette a righe (the “striped shirt”) rebellions of Genoa on to a Hot Autumn, a Creeping May, and a range of other seasons, months, and years irrevocably marked by bitter struggle against capital and its stewards.

Since our work unfolds as a renewal of a direct contact with class situations in order to find a way to organize the embryos of antagonistic class consciousness that reproduce themselves amongst workers, it is worthwhile precisely to the degree that it becomes a revolutionary consciousness of this unfolding story.

This article analyzes schematically several aspects of the so-called “wildcat” mode of struggle recently adopted by the FIAT workers; it does not theorize it as the “only” one possible. It’s a “particular” analysis, not because the events described are exceptional or exclusive to that “core mass” of workers that are FIAT, but because the general dimension, within which only the movement is “political,” is implicated here as the determinant presupposition but isn’t directly analyzed.

We succinctly present here the outline of one of the publications with which, in the near future, we’ll translate directly into theoretical-strategic work some of the findings that have been surfacing for years with a continual practical-political presence, years of tactical surveys of the terrain of class war. We’re choosing again a nodal point: once again, FIAT, “class composition at FIAT.”

Learning to Struggle: My Story Between Workerism and Feminism | Leopoldina Fortunati

When I encountered workerism, I was 19 years old. I was a grassroots militant of the students’ movement from the University of Padua. I was young, and thus I was silent and I learned. I remember that in many meetings I wanted to say things, but I was shy and insecure and therefore I preferred to keep quiet.

The Gendered Circuit: Reading The Arcane of Reproduction | Maya Gonzalez

In order to appreciate the intervention made by Fortunati – beginning over a quarter century ago, along with the other founding members of the group Lotta Femminista, including Mariarosa Dalla Costa – we must first jettison some of our Marxist baggage. We might call this habit of thought “the arcane of productive labor,” a privileging of value production as that which defines class exploitation.

NO INVESTIGATION, NO RIGHT TO SPEAK

From Établissement to Lip: On the Turns Taken by French Maoism | Jason E. Smith

In his remarkable and still untranslated 1976 book Lenin, the Peasants, Taylor, Robert Linhart speaks of the arc of the “elation of the intellectual petite bourgeoisie”: the “about-face” that unfailingly transforms an initial “mystical adoration” for the masses into “disgust.”

An important movement has been set in motion in the UJC: Marxist-Leninist militants have formed établissement groups and are going among the popular masses, to live in their midst and to work in production.

The Intolerable-Inquiry: The Documents of the Groupe d’information sur les prisons | Alberto Toscano

We are fortunate to now have in a French edition a collection of the five booklets produced by the GIP between February 1971 and January 1973 – Intolérable, numbers 1 through 4, and a collection of prisoners’ demands – combining questionnaires and inquiries on prison conditions, texts and declarations from prison uprisings, reports by prison psychiatrists, a dossier on the killing of George Jackson and the black prison movement in the US, and correspondence and information about the wave of suicides in French prisons.

As the newly poor and unemployed found themselves abandoned by traditional political institutions, they turned to multiple forms of investigation to understand the conditions in which they found themselves, and to develop more effective forms of action and organization.

“Smile Down the Phone”: An Attempt at a Workers’ Inquiry in a Call Center | Jamie Woodcock

I chose the site for my workers’ inquiry the way most people find casual employment: by responding to a generic internet advertisement. The advert for the job that I eventually got directed applicants to ring a voicemail number that instructed them to leave a message with their name, number, and why they would be good at the job. I received a call the following day and was invited to come in after the weekend for an interview.

Char­ter school teach­ers are asked to do a great deal of intel­lec­tual work, such as writ­ing their own cur­ric­ula, in addi­tion to an exces­sive amount of phys­i­cal and emo­tional labor, such as serv­ing meals and super­vis­ing stu­dents before and after school. In addi­tion, they are expected to com­pe­tently func­tion within the new forms of self-regulation that Emil­iana Armano has described as char­ac­ter­is­tic of knowl­edge work.

When I tell people that I work at a library, a common response is to ask whether I sit around reading books on the job all day. Although asked jokingly, the stereotype contains a kernel of truth and points to a real site of conflict.

Towards a History of the Professional: On the Class Composition of the Research University | Mark Paschal

The introduction of research into the mission of higher education, a transformation which took place first in Germany and Scotland, had profound and lasting effects; principal among them was providing a means by which faculty in the United States (where the state was far weaker than it was in Europe) could professionalize, organize, and create a new institutional form – a hybrid of European and US higher education now hailed as the American Research University.

An old limit, perhaps “the” limit of the established political system, is its refusal to accept any ruptures in its rationality that may come from rising political movements. When a new political movement erupts on the scene with unexpected force, even when foreseen, the first move of the political establishment is defensive action and the attempt to assimilate and neutralize it.

FUTURE DIRECTIONS FOR THEORY AND INQUIRY

Inquiry, which in this case is a subjective reflection on socially imposed practices, allows me to clarify the articulation of this work, not only in relation to the productive process and the dynamics of gender, but also with the possibility of socialization (waged or not) of some of its parts.

To be a productive laborer is not a privileged position, as scientific socialism says. Antagonism entails struggle, and society reproduces itself by means of struggle – for access to the means of subsistence, against the reduction of life time to the labor time of surplus value. At its best operaismo is the approach of this insight.

The Multiplication of Labor: An Interview | Sandro Mezzadra

What, then, is “the proletariat”? And first, how many names does it have? Proletariat, working class, laboring classes, laborers, waged workers, popular classes… are all these “divine names” equivalent? And if they are not, by which differences can they be distinguished?

We start with three imprecise terms to describe a passage, a movement, some circumstances. We take three well-known proper names from the Argentine political narrative: the 90s; the 2001 crisis; and “the model” (of “growth with inclusion”).

At any major demonstration in Oakland, you will see police from all corners of the East Bay • I do clerical work at the University of Sussex • When I was attending Cypress Community College in Southern California, I worked at Labor Ready, a construction temp agency, so that I could pay for school • We are still finding lessons from the last cycle of California’s student struggle • I’ve been organizing with the California Student Union (CASU) project since its inception as a working group created during the first Southern California Education Organizing Coalition conference • Linnaeus is a city of lines straight and single.