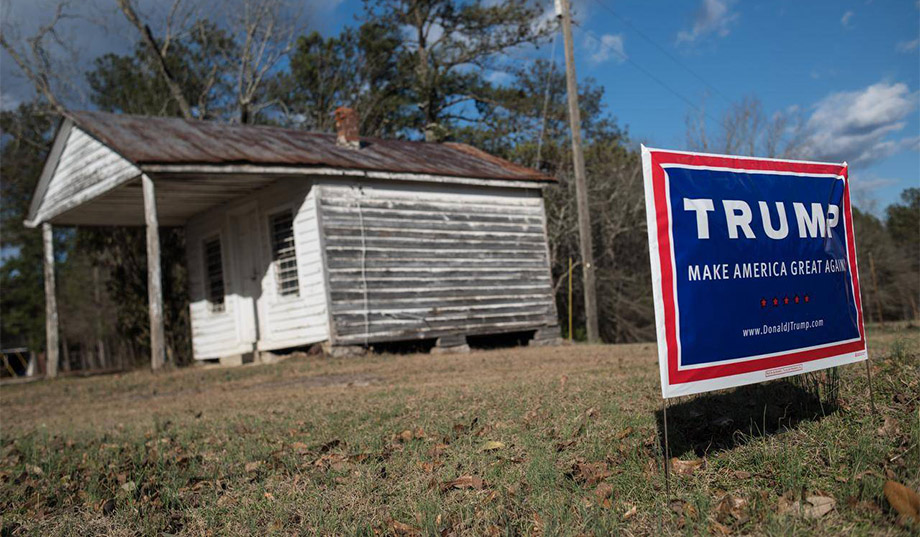 November 8, 2016 – we may remember this as the day that the liberal elite of the American coasts learned of a world outside its Facebook feed. The cohesion of their worldview was ruptured by the maps that split the nation and the liberal imaginary in two, the very cartography that had become a hallmark of that imaginary: blue fringes separated by a vast landscape of red, an unknown continent of resentment, nationalism, family values, and firearms.

For the months running up to this upset, the liberal worldview attempted to maintain its unity, portraying the residents of the Rust Belt as dupes of an absurd, spectacular machine. They had been swayed by the ravings of a buffoon who appealed to their most ignorant, reprehensible prejudices. Yet the rational and literate among us, this narrative assumed, could not possibly resist the allure of a pantsuit, an elegant and professional uniform of the American future for the cosmopolitan and enlightened liberal who prefers drone strikes to militias. Backed by a tremendous war chest, an arsenal of celebrities, and a claim to represent love itself, this exemplary liberal subject would determine the course of the election. Its votes would outnumber those of the dupes; it would see itself reflected in the White House, to carry on the legacy of the University of Chicago professor.

The non-dupes, however, were mistaken. The perverse ideology of Trumpism had far greater material force than any rational calculation – to the point that the entire statistical apparatus of the liberal media managed to get things exactly backwards.

Today the non-dupes are also moralists. And who can blame them? An electoral mandate for unhinged misogyny and racism is terrifying, and demands condemnation. Sadly, this wholly justified indignation presents no path to a political practice which can destroy such monsters. All our cultural education, the Ivory Tower hegemony of political correctness, has not managed to shatter the ugliest legacies of our Herrenvolk democracy; in fact, it seems to have provided such bigotry with a new source of nourishment, as common decency is rejected along with MSNBC and lattes as the culture of the establishment.

Liberals appear to be at a loss to explain how their worldview shattered overnight. It’s too early to tell what happened, and a full analysis will require detailed, empirical investigation, but a few things are clear at the outset.

Even while numbers continue to roll in, a lack of enthusiasm for the parliamentary process has made itself felt. If the numbers hold, voter turnout was at its lowest since Bush-Kerry in 2004. Whatever comes of these numbers, the map tells a clear story of a striking shift that sweeps across the Midwest, with nearly one third of the 700 counties that went twice for Obama defecting for Trump. Indeed, at the same time as a surge of votes coming from rural areas, the urban base of the Democratic party in these same states saw lower voter turnout – total Democratic votes fell by nearly seven million from 2012 levels. To offset the surge from the countryside, the Democrats needed high numbers from the cities. They didn’t get them, and this is why Hillary Clinton lost in Pennsylvania, Wisconsin, and Michigan.

This outcome can in part be chalked up to voter suppression, especially in places like North Carolina and Wisconsin, but that does not tell the whole story. We must look instead to the logic of the lesser evil, which has never brought bodies into the street, and is barely more effective for bringing them to the ballot box. This year’s voters wanted to vote for someone, not against someone, and alarmingly this dynamic worked in Trump’s favor. The Not-Trump platform of the Democrats succeeded only in demoralizing people. Nearly half of all eligible voters stayed home.

This lack of positive vision led liberals to a failing identitarian strategy. As a woman, Clinton expected to secure the female vote, which she thought would deliver her the election. In fact, a large part of her campaign was devoted to exposing Trump’s vile misogyny. Yet when the numbers came in, 53% of white women went for Trump. Clinton received only 43% – worse than Obama among white women. The nostalgic second-wave appeal to common womanhood had completely failed.

The identitarian strategy revolved equally around race. Clinton is white, but based her campaign on winning non-white voters, with the assumption that since Trump was so clearly a white racist, non-whites would come to their senses and vote against him. And indeed they did – to an extent. In fact, Clinton did worse among African Americans and Latinos than Obama. More surprisingly, nearly a third of Asians and Latinos voted for Trump. To conclude that Clinton’s numbers were lower than expected hardly does this scenario justice. What happened is that one third of Latino voters cast their ballots for a man who called Mexicans rapists and criminals and promised to build a wall along the border.

There are many reasons for this bizarre outcome, religion and social values among them. But there is a deep, drastic failure in the identitarian strategy to mobilize its very own constituency – one which has its obverse in Trump’s extraordinarily successful white-nationalist identity politics. With the demographic shifts in the United States, Trump’s anti-immigrant racism should have destroyed him from the beginning. Yet the Clinton campaign managed to convince many non-white voters to stay home, and some to vote for the candidate endorsed by the KKK. There is no question that white racism contributed massively to Trump’s success; but to combat racism in this country, we will have to rethink an anti-racist strategy that has served mostly to diversify the professional-managerial class.

Some on the left are tempted to join Barack Obama in saying that “the sun will rise in the morning” – put differently, that like every other election, we are dealing with just another criminal, another politician who will keep the capitalist gears spinning. But once again they are mistaken. A reorientation of ruling-class strategy and a realignment of its power bloc will have consequences for the future field of class struggle that we cannot predict in advance.

This realignment cannot be reduced to a clear meaning, advantage or disadvantage. To be sure, it has opened a space for a right-wing extremism that should put all those who care about justice on alert. Yet at the same time, we see that the ruling bloc is not so omnipotent, not so monolithic. On the Democratic side, the establishment crushed the Bernie Sanders campaign. But on the Republican side, Trump secured the nomination by taking advantage of the wide and incoherent field. First, the Republican establishment was torn between 17 candidates. Second, between Ted Cruz and Trump, they supported the less ideologically coherent Trump because they felt they could have greater influence over him. Third, when the hour of decision finally came, it was too late: Trump had pushed every alternative into irrelevance.

During the election, we saw the same dynamic. Some of the most significant sectors of the ruling bloc lined up behind Clinton: elements from the military, CIA, big capital, mainstream media, and Wall Street. Influential Republicans, from Colin Powell to Glenn Beck, said they’d vote Democrat. The Clinton camp had money, infrastructure, networks, and a vast, experienced ground game. Trump had nothing in comparison, despite winning a majority of the wealthiest voters. Major sectors of the ruling bloc had chosen Clinton – and yet, despite the odds, they lost.

Of course, this fragmentation is not the same as weakness – the ruling bloc will adapt, will maintain the existing structures of property and power, and will likely profit handsomely while continuing to repress working people. But it nevertheless shows that the divisions within the bloc are more severe than we thought, and that the ruling bloc’s overall ability to steer the course of U.S. politics is not as firm as we feared.

Most importantly, this upset has shown that the masses have moved, though not in the direction we hoped. We Marxists held steadfast to the shimmering clarity of our economic analysis. Correctly, we observed that while Trump’s coalition certainly included some typically working-class elements, its most hegemonic fractions were drawn from the professional-managerial class and small business owners. Generally, most American workers – yes, even the white ones – have never actually been inclined towards conservatism; in fact, their electoral choices – if they vote – are largely ad hoc and float above their more or less left-liberal attitudes about class inequality. After all, even though many workers cast a ballot for Trump, Clinton won the majority of voters who earned less than $50,000 a year. Just as correctly, we saw that Trump’s rise was a threat to a ruling class that has converged across party lines on a neoliberal policy consensus. But all this did not turn out to be decisive in the concrete reality of the political conjuncture. The correctness of our analysis did not give us access to the ideological unconscious that drove voting behavior and an epochal shift in the operations of the American state.

Indeed, if we have learned something from this election, it is that we know very little about the people represented on our maps. Trump, it seems, won voters without a college degree, white voters of nearly all ages, and the wealthy. But so much remains unclear. What class fractions do these voters belong to? How deeply entrenched is their racism? What are their most burning issues? How did they feel about Sanders? What of those white voters who went twice for Obama only to line up behind Trump? Who were the 40% of the lowest income voters or the 49% of union households supporting the Republicans? Why, ultimately, did these voters – especially nonwhite voters – cast a ballot for Trump? What about those 200 million or so Americans – the majority – who didn’t cast a ballot for either candidate?

The form a revolutionary strategy will have to take is to be determined and constituted by scientific analysis and popular struggle. Both of these require us to log out – to leave the digital fortress that imprisons left-wing intellectuals in a comfortable petty-bourgeois culture and reduces our politics to idealist wandering. Wander we must, but not on our Twitter feed. We need to leave our bubbles. Those in the cities and suburbs need to investigate them as if they were new to us. Those in the countryside and small towns need to leave our zones and push further into rural America, to knock on doors and talk to people across the country. We have to talk to Trump voters, of course, but also to those millions who didn’t vote this year and the almost 100 million who cannot vote.

From these conversations we can discover the forms of organization that people are already in the process of constructing, formulate an appropriate strategy for this unforeseen conjuncture, and begin to rebuild socialist politics with a mass base. Now more than ever we have to work together, synchronize our efforts.

There are no easy victories – only years of hard, coordinated organizing ahead. The first step for every revolutionary is logging out.